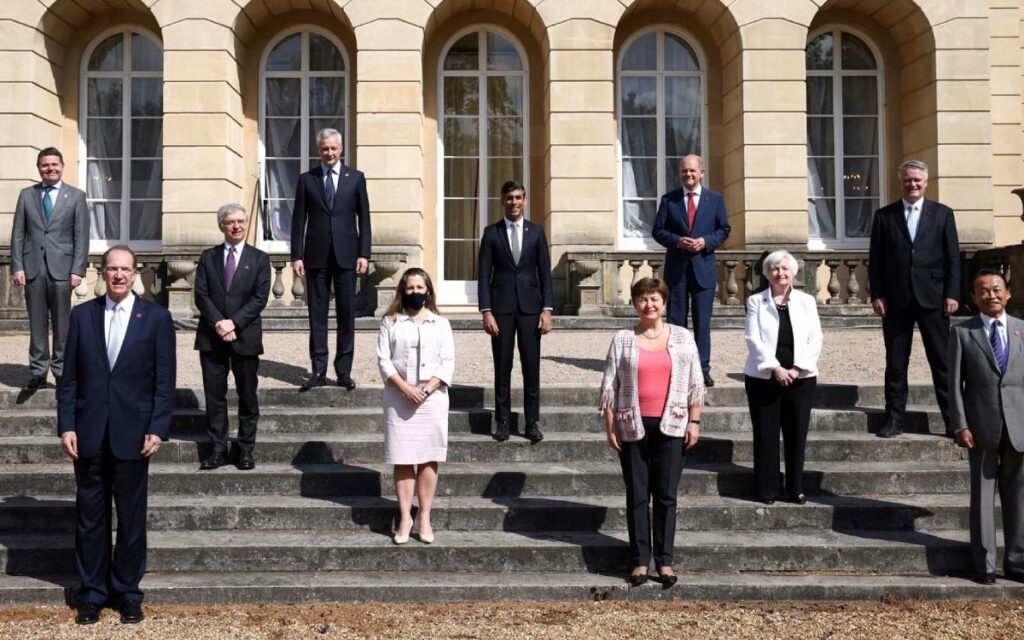 Finance ministers from participant nations at the 2021 G7 summit in the U.K., June 5. Canada’s Chrystia Freeland is in white near centre. Photo credit: Reuters/Henry Nicholls

Canadian politicians like Chrystia Freeland see tax competition as a “race to the bottom.”

But for the rest of us, a global tax cartel will mean an inevitable march toward higher tax bills and more pork for companies with access to politicians.

Freeland agreed to the American-led proposal for a global minimum business tax of 15 per cent at a recent meeting between G7 finance ministers.

This cartel is being pushed by powerful politicians to bully other countries into raising taxes so they can offload the costs of their overspending onto job creators, their employees and customers.

“Democrats want a high global minimum tax that would end national tax competition and reduce the harm from their huge tax increase on U.S. business,” wrote the Wall Street Journal’s editorial board.

The global tax cartel will open the door for higher taxes.

“It will merely be a matter of time before they ratchet up the tax rate,” said U.S. economist Dan Mitchell. “The next step will be harmonized and higher tax rates on personal income, dividends, capital gains, and other forms of work, saving, investment and entrepreneurship.”

This hasn’t been lost on politicians.

“This is a starting point,” said French Finance Minister Bruno Le Maire. “In the coming months we will fight to ensure that this minimum corporate tax rate is as high as possible.”

The minimum business tax would strike a blow against tax competition. That competition is the single greatest force keeping politicians from indulging their inner most fantasies of raising taxes.

Case in point: Lloydminster, the small city straddling the Alberta-Saskatchewan border. Taxes were higher on the Saskatchewan side of town for a long time, and it showed.

“All the shopping malls, most chain-outlets, hotels, grocery stores, restaurants, other shops and businesses are mostly located on the Alberta side of the city which has no PST at all,” reads a Saskatoon Chamber of Commerce report from 2007. “The situation in Lloydminster perfectly represents the drawbacks of the uncompetitive nature of Saskatchewan policies for the business sector.”

Saskatchewan was forced to provide sales tax exemptions and gas tax rebates to help the city’s east side.

Tax competition also pushed Ottawa in the right direction. When announcing business tax cuts in his budget, former finance minister Paul Martin told Canadians: “we need a corporate tax system that is internationally competitive … these tax rates must be brought down to allow our companies to compete vigorously.”

Those tax cuts helped stimulate investment, and Canadian wages grew faster than they had in the previous decade and faster than growth in other industrialized countries between 2001 and 2012.

The cartel may limit tax competition, but it won’t stop businesses from shopping around. Instead of lowering taxes, politicians will look to woe investors with more subsidies and special privileges.

Canadian politicians already love to shower large corporations such as Bombardier, Ford and Air Canada with tax dollars. The last thing taxpayers need is another excuse for Ottawa to roll out more pork.

And to no surprise, countries like Estonia, Poland and Hungary have already said no to the minimum tax without special carve outs. China is also expected to want exemptions for its tech sector. Even the Organisation of Economic Corporation and Development said there’s a case for excluding international shipping companies, investment funds, pension funds and sovereign wealth funds from the global minimum tax.

A tax cartel will benefit the politicians scrambling to pay their massive government debts. But for the rest of us, it will mean higher taxes and more corporate welfare.

Franco Terrazzano is the Federal Director of the Canadian Taxpayers Federation.