Hirji wrestled with Niagara’s restaurants prior to pandemic 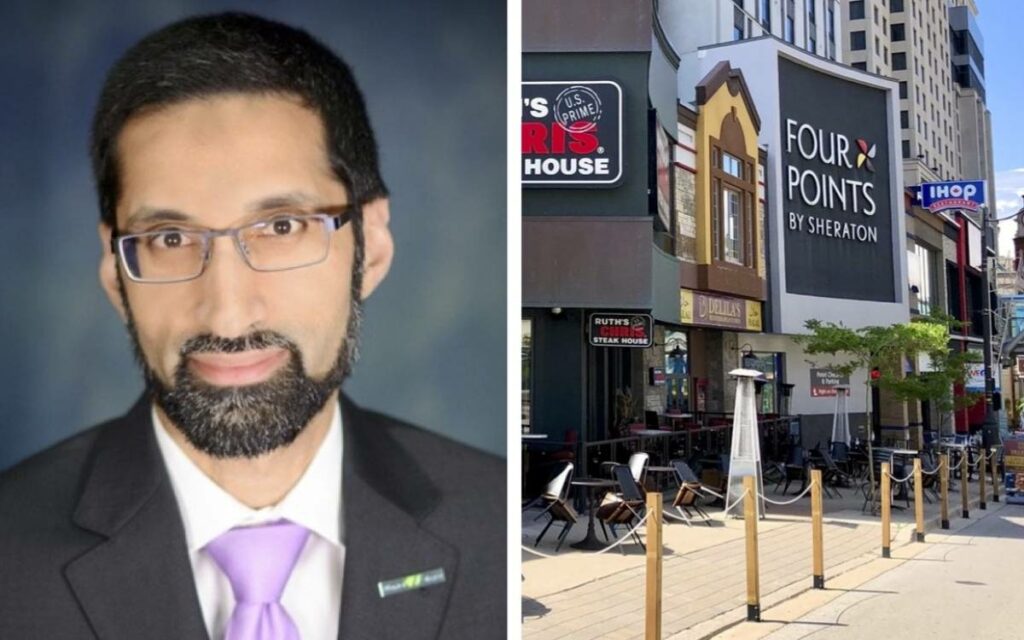 Much to the consternation of residents and restauranteurs alike, Niagara’s Acting Medical Officer of Health Dr. Mustafa Hirji continues to limit dining at eateries across the region to household members only. Prior to the pandemic, in another instance in which Hirji and local restaurants did not see eye-to-eye, Public Health launched a negative ad campaign that, according to members of the local hospitality industry, implied Niagara restaurants were something to be feared. Photo credit: Niagara Region and The Niagara Independent

Despite Ontario entering Step 1 of its phased reopening plan on June 11, Niagara’s Acting Medical Officer of Health Dr. Mustafa Hirji continues to impose pandemic-related restrictions over and above provincial regulations.

Several Niagara elected officials at the municipal and federal level have come out in opposition to the continuation of Hirji’s order.

The biggest sticking point for local officials, business owners, and residents is the provision that stipulates restaurant-goers cannot dine with anyone outside of their own household.

As Niagara’s head of public health recently told the Niagara Falls Review, “…dining in person — which involves sitting in close proximity without masks — poses a unique exception within Step 1 of the province’s reopening, and therefore a uniquely large risk of infection transmission.”

Hirji first introduced the controversial order under Section 22 of the Health Protection and Promotion Act back in November 2020. Immediately following its implementation, an online petition was circulated – which now boasts over 5,500 signatures – calling for the public health commissioner to reconsider his restrictions on food establishments.

The restrictions have remained in effect ever since, much to the dismay of restaurants across the region.

But this isn’t the first time Dr. Hirji and Niagara’s hospitality industry have not seen eye-to-eye.

Within months of assuming the temporary role of Acting Medical Officer of Health upon the retirement of former top doctor Valerie Jaeger in January 2018, Hirji ran afoul of local restauranteurs.

In an alleged effort to direct people to Niagara’s ‘Infodine’ website, where residents and visitors can browse health inspection results from eateries across the region, Hirji and his Public Health colleagues launched a billboard campaign that former Niagara Falls mayor and current city councillor Wayne Thomson referred to as “out of line and disgusting.”

The campaign saw billboards erected in Niagara’s three largest cities with the image of two individuals – presumably would-be restaurant patrons – recoiling in fear as if in a campy B-rate horror film from the 80s. Beside the image read, “Have no fear…INFODINE is here”. 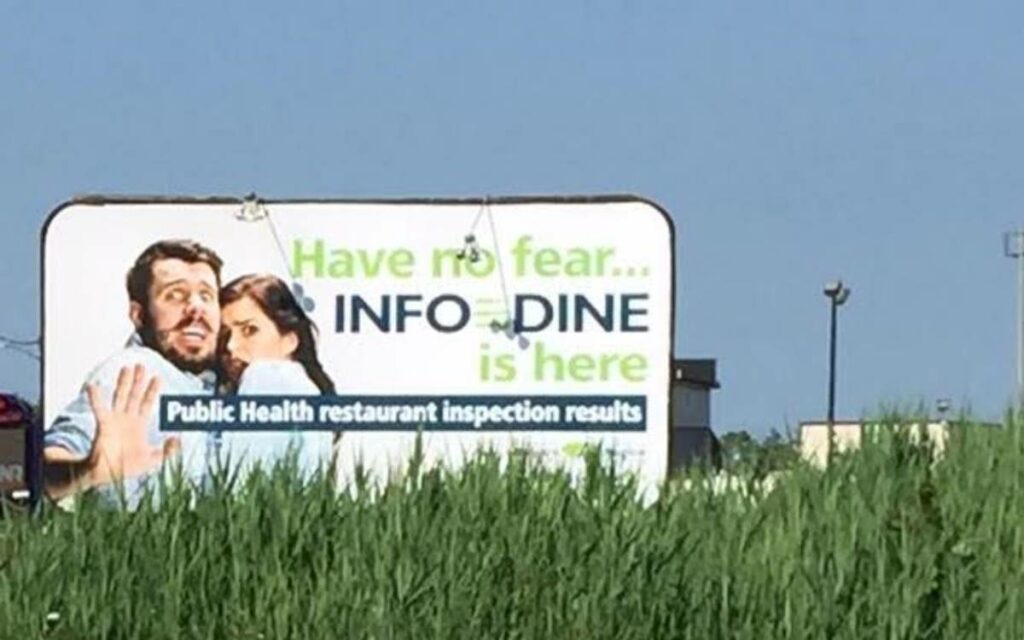 The Infodine billboard at the corner of Lundy’s Lane and Garner Road in Niagara Falls, July 2018.

Backlash to the negative messaging, that to industry owners and employees implied the region’s restaurants were something to be feared, was swift.

Representatives from the Lundy’s Lane Business Improvement Area (BIA), where the Niagara Falls Infodine billboard was installed, wrote to Hirji saying, “Restauranteurs in the Niagara Region have worked very hard over the past two decades to elevate the standard of dining to the level where Niagara is now considered the culinary capital of Canada. This is an achievement that we must collectively embrace, enhance and celebrate.”

“The Lundy’s Lane BIA understands the importance and role of the Region’s Environmental Health Team in maintaining the highest of standards in the industry and apprising the public of compliance and non-compliance. Unfortunately, the message, although well intended, is damaging to the industry and all that we have achieved.”

Executive Director of the Fallsview BIA Sue Mingle agreed, telling Hirji, “This is an important sector of our economy and I certainly understand the need, concern and importance for health and safety, [but] this type of campaign leads the reader to assume that they should have great fear when dining here.”

“I also see the humour in the graphic choice,” said Mingle. “But since it’s a billboard and people are driving by, I don’t imagine they are analyzing the context – [they’re] just getting a subliminal message to fear our dining establishments.”

After some back and forth, as well as urging from senior staff and several local and regional councillors, Hirji eventually agreed to change the image and a new billboard was erected.

Following the incident, while defending the overall campaign and pointing out the importance of resources like Infodine, veteran journalist at Niagara This Week Paul Forsyth wrote in an editorial, “Public health probably missed the mark with that first billboard that showed looks of horror on people’s faces.”

“A less inflammatory billboard,” concluded Forsyth at the time, would do the trick in directing people to the Infodine website and “should be welcomed.”

Over the last few days, Niagara has met Hirji’s arbitrarily set threshold – 15 cases per 100,000 residents and a reproductive rate below 1.0 – that was supposed to allow individuals to be able to dine on patios with people outside of their household. However, for now, the restriction remains in place.

In his most recent COVID-19 media briefing on Monday, Hirji appeared to stretch his previous criteria and said that he “wants to make sure we are very clearly under that 15 threshold.”

“It looks like it dipped below that today,” Hirji acknowledged, “but we do see that as we update our numbers everyday sometimes that number gets adjusted upwards again. So, we’ll see what it looks like over the next couple days. But hopefully if the trend continues we are probably getting to the point where it would be possible to lift that restriction of dining with only your household.”

“The key thing that I want to say though is that obviously when we do that, we are giving more opportunity for infection to spread,” Hirji warned. “It remains important that everybody stays vigilant and, to the extent that it makes sense for their lives, maybe voluntarily avoid out-dining with others.” 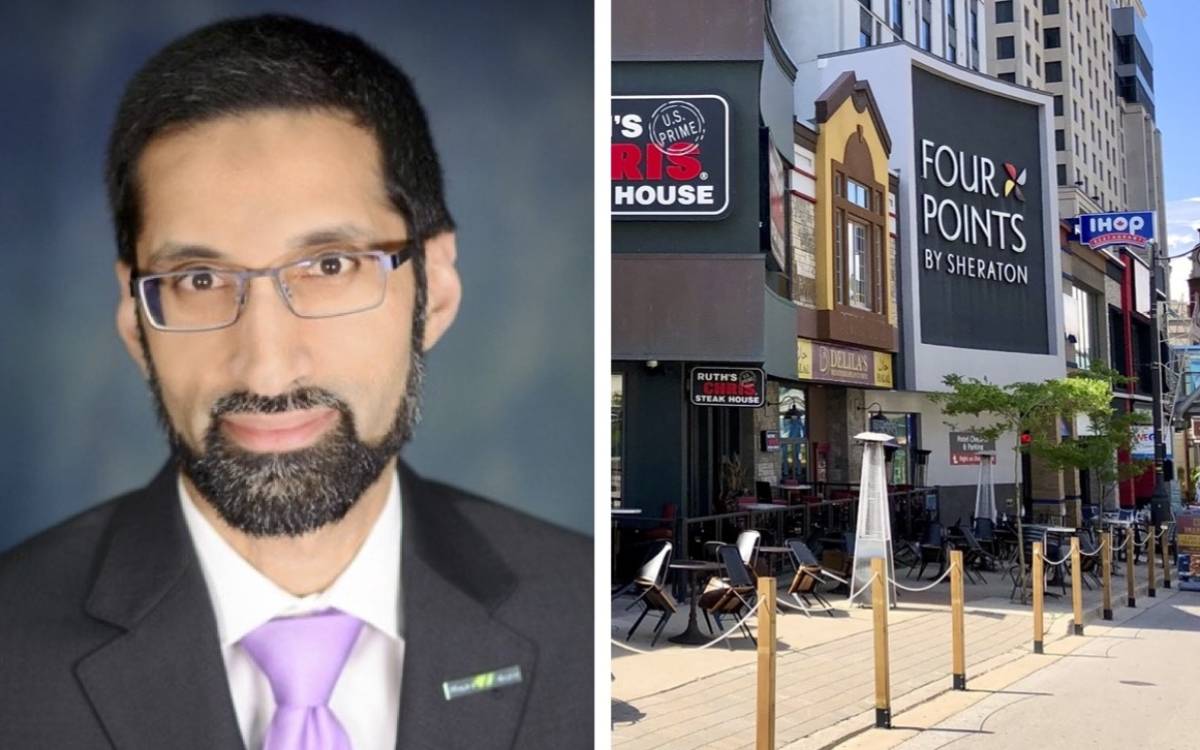