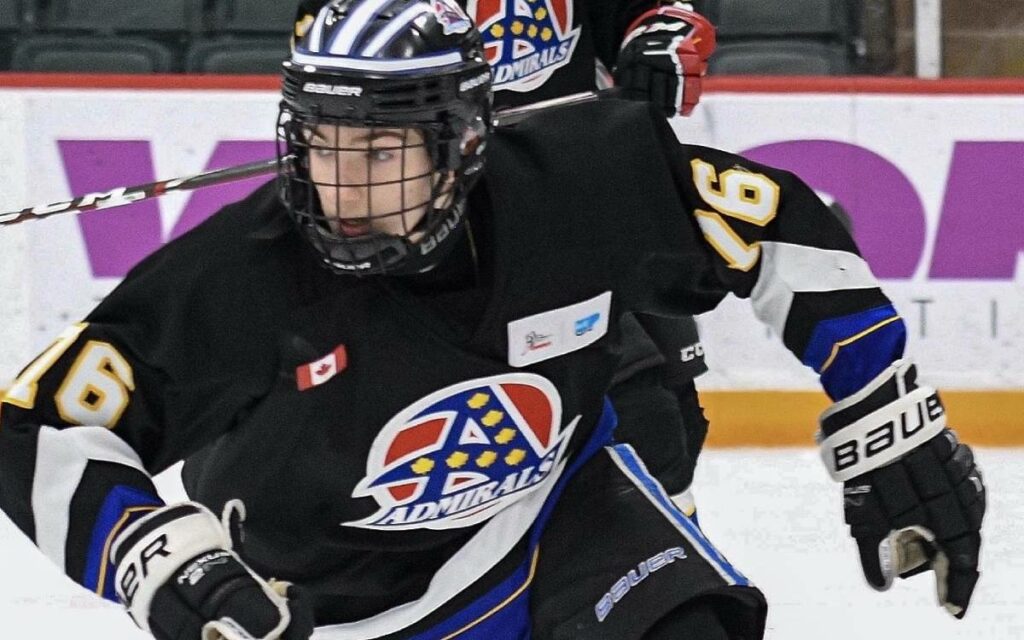 Dawson Lukey in action with the Southern Tier Admirals in 2020. Lukey was the Niagara IceDogs’ final pick of the OHL Priority Selection draft. The St. Catharines native should feel right at home with his new team. Photo credit: BP Sports Niagara/ Bill Potrecz

Like a lot of things these days, it certainly wasn’t the norm but in the end 299 players representing 83 different teams were drafted into the Ontario Hockey League (OHL) from Friday night into Saturday afternoon.

We’ll highlight the Niagara IceDogs draft picks and players from the Niagara Region drafted into the OHL.

The IceDogs welcomed 16 players to their club, and it started with a trio of second round picks and a third rounder on Friday evening.

One pick later, Niagara selected the first goaltender in the draft – Joey Costanzo from the Toronto Marlboros.

Centreman Declan Waddick, from Sun County Alliance, was next up at 39th overall, followed by defenceman Andrew Wycisk with the 45th overall pick.

“We went in specifically targeting Copeland and Costanzo at the top of the second [round],” said IceDogs general manager Joey Burke.

“To be able to come back with Waddick and Wycisk is something we never thought would be possible.

We had all four of these guys as first-round talents, and to get them all is a dream scenario for us.”

Day 2 of the OHL Priority Selection Draft began at 9am on Saturday morning with rounds 4 through 15, and Burke went up the middle again selecting centreman Connor Haynes from the Markham Majors.

Exactly twenty picks later it was back to the blueline as Jax Wismer from the York-Simcoe Express joined the IceDogs.

Burke went back to the Honey Baked organization to draft left-winger Cole Bishop with the 105th overall selection.

If you’re counting at home that’s three players from the storied Detroit franchise.

Up next was left-winger Giacomo Martino, at 134th, from the Vaughn Kings, followed by Anselmo Rigo, a centreman, and teammate of Costanzo with the Marlboros at 145th.

Burke would make his first local selection at 174th overall when Matthew Lee, a centreman who grew up in Fort Erie, heard his name called.

With the 185th overall pick, the IceDogs picked blueliner Adamo Zingrano from the Mississauga Reps.

Alex Laurenza, a centreman from the Toronto Jr. Canadiens was next at 212th overall.

Mitsis’ teammate, goaltender Matteo Porporino was the IceDogs next selection.

St. Catharines-born Dawson Lukey was the IceDogs’ final pick of the draft.

“We had an outstanding day, further to that, I have never been more confident following a draft knowing that we got excellent value in every round,” Burke said.

“We added an unbelievably deep, high-end, group that all have a chance to be impact guys at our level.

It just shows that, even in an uncertain year, if you put in the effort you will succeed.”

Three other Niagara born players were drafted into the OHL over the weekend.

Grimsby’s Nate Day was the second goaltender selected, going in the third round, 57th overall to the Flint Firebrids.

Interesting pipeline here, as Welland native and defenceman Dylan Lariviere (grandson of former NHLer and St. Catharines Saint Gary Lariviere) went in the ninth round, 166th overall to Flint out of the Southern Tier program.

St. Catharines resident, and the captain of the Niagara North Stars, Jordan Schanbacher was drafted in the 11th round 219th overall by the Barrie Colts

One other note from the draft – Taya Currie, from the Elgin Middlesex program, was the first female ever selected into the Ontario Hockey League.