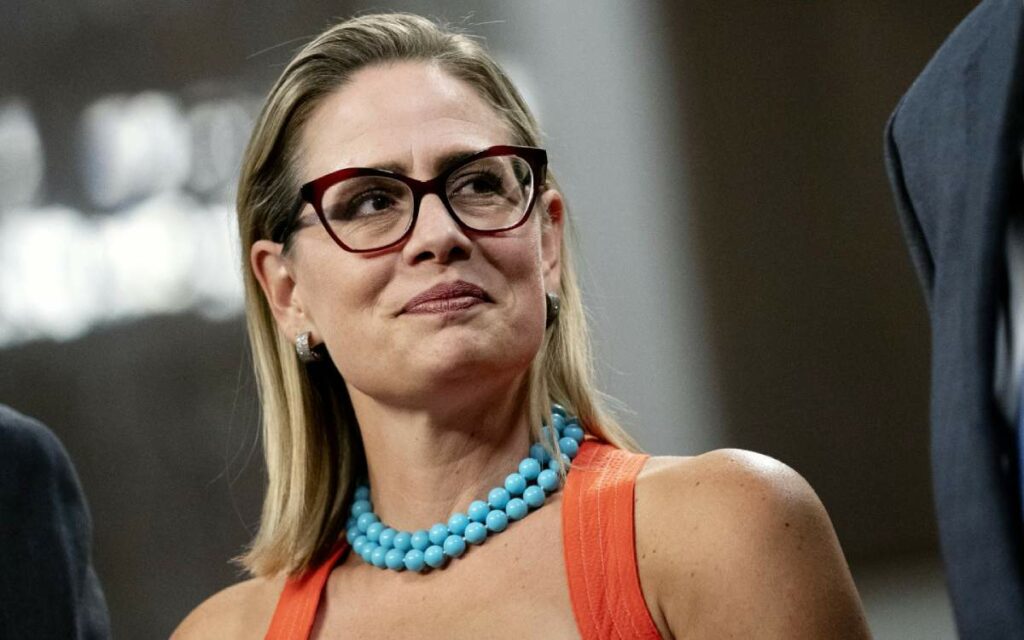 The senator from Arizona formally split from the Democratic Party and registered as an Independent earlier this month. Photo credit: Getty Images/Bloomberg

In a recent article, I wrote about the radical shift that has overtaken the Democratic Party. Those who take issue with this view can now take it up with the Senior Senator from the State of Arizona.

Senator Kyrsten Sinema, sitting in a long held Republican seat, announced in early December her departure from the Democratic Party. Much will be made of the fact that she intends to remain in caucus with the Democrats and that she has voted to support President Biden’s initiatives about 95 per cent of the time. Big media will muse that it makes no difference, and the talking heads dismiss the entire exercise as performative. Maybe not. There are three important discussion points to consider as the new senate begins sitting in January. Sinema’s decision hearkens to strategy, philosophy, and treatment.

Ms. Sinema’s move indicates a cunning understanding of Arizona’s electorate. Back to the days of Barry Goldwater, the 1964 Republican nominee and Arizona’s legendary senator for five terms beginning in 1953, exhibiting an independent streak towards national thinking has characterized both the people of Arizona and the representatives it elects. Sinema’s acknowledgement of this manifested itself prior to last week’s announcement when she became unwilling to accede to progressive demands, specifically in regard to funding massive pork laden spending bills for favoured groups of the left.

Sinema knows the practicality of everyday Arizonans does not include passing legislation festooned with spending for every special interest group supportive of the Democratic Party. She knows this purple state is not going to reward representatives who vote like New York City liberals. There are nine congressional districts in Arizona and Republicans represent six of them.

Two Democratic senators occupying the senate seats from the Grand Canyon State speaks more to the substandard candidates the GOP has nominated of late and to a state Republican Party so Trumpy that unless you support all Trump-endorsed candidates you are called a RINO (Republican in Name Only). Sinema knows her state, her constituents, and moved this past week to address what she sees as an obvious liability – identifying with a party moving leftward, far outpacing the citizens she hopes to continue representing.

The second factor is Sinema’s own evolving political philosophy. In her first foray into politics, she settled on the far left, leading anti-war protests, advocating Marxist economic policy, and generally opposing American foreign policy on all fronts. Sinema eventually chose to enlist as a member of the Green Party. She worked on Ralph Nader’s presidential campaign in 2000 when the consumer advocate probably cost Democrat Al Gore the presidency. It did not take her long to figure out that being a member of the Green Party would likely entail much effort and little reward.

After finishing fifth in a five-person race for Congress in 2002 she had a political epiphany. In 2004 Sinema declared herself a Democrat. Slowly, but steadily, Sinema began to evolve in her thinking. Her economic outlook drifted back to the centre, her musings about America moderated, and she seemed to grow in her understanding of how America worked and how rewards were gained in politics.

She could not be confused with Arizonan legends like Goldwater or John McCain at this point, but her views were gradually beginning to sound a lot like a candidate seeking to become viable state-wide, and not just a politician hoping to represent a particularly progressive district in Congress for decades to come.

Sinema won election to Congress in 2012, and then to the Senate in 2018. Over her tenure as a member of Congress, her obvious shift to the centre-right on economic issues manifested itself. She joined the conservative Democratic Blue-Dog caucus and then decided to throw her hat into the 2018 Senate race when incumbent Republican senator, Jeff Flake, after locking heads with President Trump, decided to step down. Sinema defeated fellow Congress member, Martha McSally, and gradually, over the past four years has inched closer to the centre. After tussles with a number of progressive members of the Democratic Party in both the Senate and House, Sinema announced on December 6 her departure from the Democratic Party and registration as an Independent.

Thirdly, Sinema, it could be said, had been driven out of the Democratic Party. She and Senator Joe Manchin of West Virginia received poor treatment from fellow party members throughout 2021 and 2022. While President Biden ran on a moderate platform of returning things to normal after the turbulent Trump presidency, he has governed unashamedly as a progressive, spending money so extravagantly, it would make Bernie Sanders blush.

The excessive expenses of many of Biden’s programs caused both Manchin and Sinema to hesitate in their support. Despite bullying and threats from Sanders or members of the so-called “Squad” like Alexandria Ocasio-Cortez, Sinema and Manchin held strong, getting reductions and compromises that allowed them to eventually support things like the Administration’s Inflation Reduction Act.

After the 2022 elections, with Sanders and others encouraging Rep. Ruben Gallego to face off against Sinema in the 2024 Democratic primary, Sinema outfoxed them, choosing to become an Independent. This crafty move means that Democrats, if they field an opponent, would likely split the vote and the Republican nominee would win.

Sinema, in making her decision, stated, “Americans are told that we have only two choices —Democrat or Republican — and that we must subscribe wholesale to policy views the parties hold, views that have been pulled further and further toward the extremes,” she wrote. “Most Arizonans believe this is a false choice, and when I ran for the U.S. House and the Senate, I promised Arizonans something different.” Democrats are incensed. Some are now threatening to lead a recall vote and have her stripped of her office. Unfortunately for them, the Arizona state constitution does not allow for a recall of a senator.

If trends continue, Sinema may find herself treading on the ground of her predecessor John McCain, who frustrated Republicans for decades because he would not follow party dogma on every issue. Whether Ms. Sinema ends up serving several terms as an Independent, finds her way home to the Democratic Party, or decides to move further right and join the GOP, she has already made a name for herself and is a senate member worth watching as this partisan era moves fully into the 2020s.

Keep an eye on Kyrsten Sinema, she rarely stays in one place for very long.