Politicians haven’t been honest about their carbon taxes 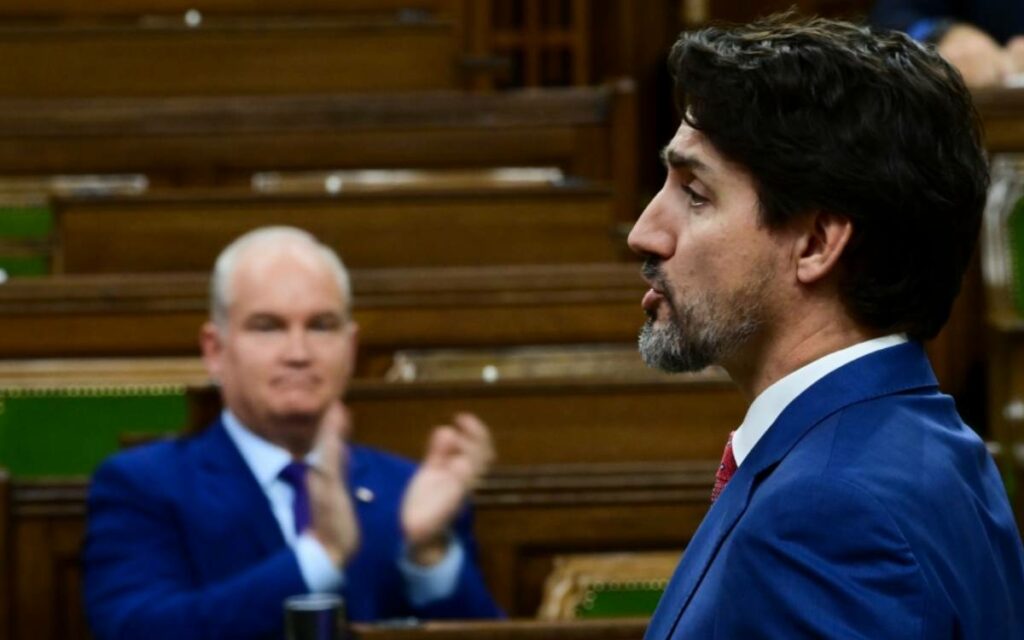 Prime Minister Justin Trudeau (foreground) speaks in the House of Commons while Leader of the Official Opposition Erin O’Toole looks on with applause (background), October 21, 2020. Both party leaders have come under scrutiny as of late for alleged dishonesty regarding their respective carbon tax plans. Photo credit: The Canadian Press/Sean Kilpatrick

When you got straight A’s on a report card, it’s a good bet you rushed home from the school bus to show your mom and dad. Maybe they even stuck it on the fridge. But if that report card was covered with F’s you probably weren’t that eager to bring it up at dinner time.

When it comes to their carbon tax plans, both Liberal and Conservative politicians are acting like the youngster who’s trying to hide their bad report card from their parents.

Politicians aren’t being truthful with taxpayers.

Before the last federal election, the Trudeau government told voters it had “no intention” of raising its carbon tax beyond $50 per tonne.

In the midst of COVID-19, Prime Minister Justin Trudeau promised not to raise taxes or costs.

A few months later, Trudeau then blindsided taxpayers and announced that he would hike the carbon tax to $170 per tonne by 2030 and layer on a second carbon tax through fuel regulations.

When he was running for party leader, he signed the Canadian Taxpayers Federation’s pledge to fight carbon taxes. The pledge was unequivocal:

“I will: Immediately repeal the Trudeau carbon tax; and, reject any future national carbon tax or cap-and-trade scheme.”

Less than a year after signing the pledge, O’Toole announced he would introduce a carbon tax of his own.

Why are party leaders hiding their true intentions from Canadians?

Maybe it’s because politicians know voters would give their carbon tax plans a failing grade?

More than half of Canadians don’t support plans to raise carbon taxes every year for the next nine years, according to a Leger poll commissioned by Secondstreet.org. The same poll showed that more than two thirds of Canadians oppose paying $20 in carbon taxes to fill up their car.

With the high taxes Canadians are already paying for fuel, there’s no wonder they don’t want politicians driving up the price of gas even higher.

Taxes already account for between 31 and 42 per cent of the price at the gas pumps when you factor in all the different provincial and federal gas and sales taxes, a potential transit tax and the carbon tax. In Montreal, drivers are hit with six different taxes when they fuel up.

The average total tax bill for each litre of gas in Canada is about 45 cents. That means a family is already being soaked for nearly $35 in taxes every time they fuel up their minivan. That’s equivalent to more than a $200 per tonne carbon tax, even before Trudeau and O’Toole hike the federal carbon tax any higher.

Despite lighter wallets, emissions continue to go up.

British Columbia has the highest carbon tax in Canada, but emissions have still gone up 11 per cent between 2015 and 2019. Canada’s emissions also increased during the first year of Trudeau’s federal carbon tax.

With Canadian emissions accounting for only 1.5 per cent of the global total, even if we completely eliminated emissions, it still wouldn’t do much for the global environment. Even Trudeau acknowledged this.

“If Canada stopped everything tomorrow, and the other countries didn’t have any solutions, it wouldn’t make a big difference,” Trudeau said on Tout Le Monde En Parle.

O’Toole also acknowledged that “there’s nothing inherent in a carbon tax that actually lowers greenhouse gas emissions” and that a carbon tax “is not a climate change plan, the carbon tax is a tax plan.”

Politicians owe taxpayers the truth. And the truth is that our already big tax bill at the pump is going up because politicians are breaking their carbon tax promises.

Franco Terrazzano is the Federal and Alberta Director of the Canadian Taxpayers Federation (CTF).