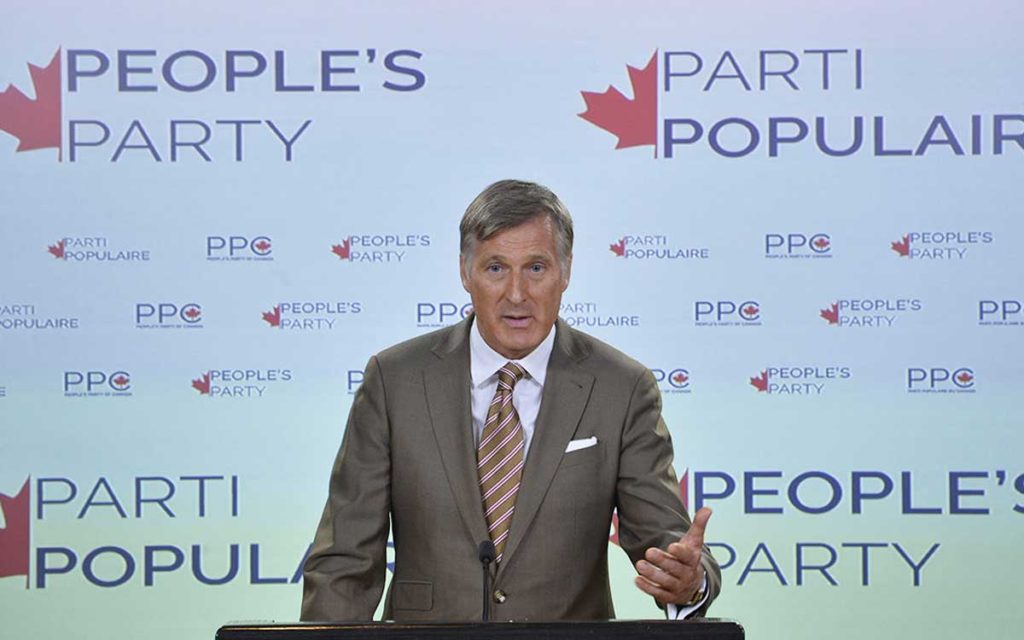 MP Maxime Bernier is the leader of the newly named People’s Party of Canada.

Surprising more than a few people, Maxime Bernier has made good on his threat to start a new political party. It is called the People’s Party of Canada, and has a logo eerily similar to the old Reform Party logo.

Many doubted Bernier’s promise to build a party from the ground up, which was his parting – and unscripted – shot from his bombshell news conference on the eve of the Conservative Party convention in Halifax last month. Quitting the caucus after several testy months and some controversial tweets on multiculturalism, Bernier declared the Conservative Party “too intellectually and morally corrupt to be reformed.”

Last week, Bernier revealed what he has accomplished over the last month. He announced the birth of the People’s Party of Canada, with himself as leader. The party has yet to be registered with Elections Canada, but has already raised $140,000 in donations and boasts two employees. Bernier asserted that he will run candidates in all 338 federal ridings next year.

As with Bernier’s August announcement, criticisms immediately followed. Former prime minister Brian Mulroney told an Ottawa audience “What I see happening with Maxime Bernier is not a good idea, I don’t think, in terms of the Conservatives getting elected again.” He added that the Reform Party was “all it took to elect the Liberals for 13 years.” Businessman Kevin O’Leary, who abandoned his own Conservative leadership bid to back Bernier, wrote in a piece for the National Post:

My sincere hope, as I expressed to Max before he left the Conservative caucus, was that he would choose to remain a part of the team, work hard to defeat Trudeau in 2019, and help elect a Conservative government that would reverse Trudeau’s destructive policies.

Unfortunately, he chose otherwise. I think it was a bad decision because under our system it is virtually impossible to build a party from scratch in 11 months that can win a leadership mandate. So, a vote for Max has a high probability of being wasted if your objective is to remove Trudeau.

Bernier made the media rounds in support of his new venture, and was asked the expected questions around policy, whether he invited any of his former colleagues to join him, and how he hoped to deter extremist members and candidates.

Bernier confirmed he had taken a call from the leader of the Canadian Nationalist Party, who proposes banning burkas, deporting asylum seekers and lowering immigration levels to 20,000-100,000 newcomers annually. Bernier told reporters that “They don’t have a place in our party. I don’t share these values.” He may have to use that line a few more times in the months ahead. He also said he would vet potential candidates to screen out any xenophobes.

In the absence of a platform, for now Bernier is relying on the policy planks from his 2017 leadership campaign. These include ending supply management, cutting corporate welfare, a balanced budget, and reducing immigration levels.

As for his former Conservative colleagues, Bernier confirmed that he has not asked any of them to join his one-man caucus. “I want to attract the base, the people,” he said. “I don’t need Conservatives who are hypocrites. A lot of them say privately that they are against the [milk] cartel, but they can’t or don’t want to speak out.”

Bernier also had a ready answer to the charge that he will draw votes away from the Conservatives. He told Global’s Mercedes Stephenson that his party will appeal equally to New Democrats and Liberals:

“We want to attract people from other parties also like the NDP,” said Bernier. “They don’t agree with corporate welfare; the program of our party is to get rid of that. The Liberals who like Paul Martin and Jean Chretien; they had a balanced budget at that time and fiscally responsible government. That’s not what’s happening with the Trudeau government right now. So we can have some of these people.”

Some will remember that Preston Manning and his Reformers similarly claimed that the Reform Party would attract disaffected NDP and Liberal voters. While Manning may have been right regarding NDP voters in British Columbia, the results of the 1993 federal election pretty much settled the issue of which voters were attracted to Reform.

Bernier deserves some credit for getting his project this far. But he has a Herculean task ahead of him. He has no riding associations to organize candidate selection or identify voters. The candidates he attracts may include those who failed to get through the Conservative or Liberal screening process. He faces a media and Liberal establishment eager to label him a magnet for racists, bigots and wing nuts (oh my), but they may temporarily hold their fire in the interest of bleeding off Conservative support.

As the saying goes, history repeats itself: the first time as tragedy, the second as farce. Having witnessed the tragedy of Pierre Trudeau, we are now living through the farce of Justin. We do not yet know whether the People’s Party of Canada will be the farce that succeeds the tragedy of the Reform Party. But it does not have to be, to deal a death blow to Andrew Scheer and the Conservatives. As many have pointed out, the loss of only a few percentage points in voter support – not to mention the currently underperforming NDP – may be enough to re-elect the Trudeau Liberals.

But the deceptively cherub-faced Andrew Scheer is not without resources or guile. The Conservative Party has a 97-member caucus that is capable and disciplined. Yesterday, the Liberal MP for Aurora-Oak Ridges-Richmond Hill, Leona Alleslev, defected to the Conservatives. And just in case the three names in her electoral district moniker didn’t give it away, her riding is in the 905 belt that is key to winning government. The party also boasts a strong organization, both centrally and at the riding level, and is back to outperforming the Liberals in fundraising.

Nevertheless, if Bernier can cobble together enough money, organization, and candidates –without too many idiot or bigot eruptions – he will be a factor in the election year that has just begun.