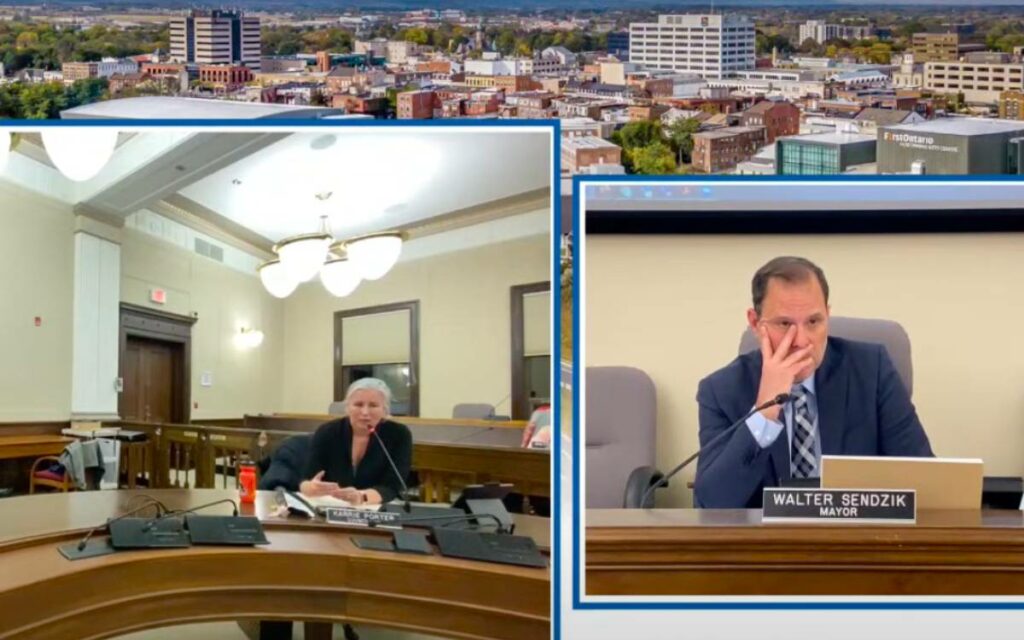 At a council meeting on Monday, amidst significant “controversy”, St. Catharines selected current city councillor Mat Siscoe to fill the vacant seat on Niagara Regional Council. The seat was vacated by the death of Sandie Bellows, who lost her battle with cancer in October.

Council chose Siscoe in direct contravention of the city’s own policy, even potentially treading upon conflict-of-interest rules and provisions within provincial laws.

Under the provincial rules, when a councillor seat becomes vacant, the respective council must fill the vacancy within 60 days. The past practice of Niagara Regional Council is to ask the local municipality for a recommendation on who to appoint.

As previously reported by The Niagara Independent, the City of St. Catharines has a policy that prescribes the process of how to fill a vacancy. The goal of the policy – developed and implemented in 2014 – was to take politics, favouritism, and nepotism out of the equation.

For example, when Jim Bradley was appointed regional chair, his regional council seat became vacant. The City of St. Catharines promptly followed its policy and forwarded the recommendation to fill the seat with the “next place finisher” Kelly Edgar.

As per the policy, and reaffirmed by a report from city clerk Bonnie Nistico-Dunk, if a vacancy occurs within the last year of a regional or city council’s term, then the “next place finisher” shall be appointed. As a result, the clerk named Mike Britton in her report as the recommended appointee, advising “the Council of the City of St. Catharines recommend the appointment of Mr. Mike Britton to fill the vacant seat of Regional Councillor for the City of St. Catharines.”

Councillor Mat Siscoe disagreed with the city clerk that the vacancy had occurred during the last year of the council term based on when council commenced. In response, clerk Nistico-Dunk stated the dates were validated in consultation with the Region’s city clerk. She stated, “If we follow our policy, that’s the dates I’ve used.”

As the meeting progressed, a vote was called by Councillor Joe Kushner to recommend Mike Britton to fill the vacancy on Regional Council. The vote was tied 6-6, which forced Mayor Walter Sendzik to cast the tie breaking vote. In contravention of the city policy, and in defiance of the staff report, Sendzik voted against the recommendation to select Britton.

Councillor Joe Kusher declared, “To deny (Britton) the opportunity to serve is to deny the democratic process and what residents voted for.” He continued, “I think we should honour their wishes.”

“We have very clear processes here, it must be followed…No one is above the law,” echoed Councillor Bruce Williamson. “In a truly democratic government people in power have to respect the will of the people.”

In addition to pushback at the meeting, there was strong condemnation toward Mayor Sendzik on social media. For instance, former St. Catharines councillor Andrew Gill wrote, “More shenanigans from this Mayor and Council…Nothing to see here, but I suspect the next in line for the Council seat is a big, big Wally (Mayor Sendzik) supporter and Council will be happy to follow the City policy at that point.”

After voting against Britton being appointed, city council then proceeded to vote on Mat Siscoe to fill the Regional Council vacancy. During the vote, Mat Siscoe voted for himself, possibly breaking pecuniary conflict-of-interest rules.

According to the Municipal Conflict of Interest Act, when a councillor has a pecuniary interest, then they shall not take part in the discussion or vote on any question in respect to the matter.

By voting for the appointment of himself, Siscoe would increase his annual earnings by approximately $10 to 15 thousand per year.

The other issue with the appointment of Siscoe to Regional Council are provisions within the Municipal Act.

In order to be eligible to receive the regional appointment, Siscoe would need to formally resign his city council Ward 4 seat. As per provincial legislation, he is required to file a formal written letter declaring his resignation to the city clerk. Upon receiving the letter of resignation, the city clerk can then declare the seat vacant “at the next meeting”.

However, at Monday’s meeting Siscoe did not formally resign and the city never declared the Ward 4 seat vacant. The Municipal Act states that a person cannot hold more than one office. In other words, although there are some exceptions, Siscoe cannot hold office at the same time for both the City of St. Catharines and the Niagara Region.

As a result, it is not legal for Niagara Region Council to accept the Siscoe appointment until he becomes eligible.

In the end, the controversy is self-admitted by Siscoe.

On his social media following the decision, Siscoe wrote, “I understand that some will find this recommendation controversial, and will disagree with the approach the City Council has taken…These are unprecedented times and often unconventional solutions are required in response.”