Trudeau cannot blame Harper if he loses at the UN 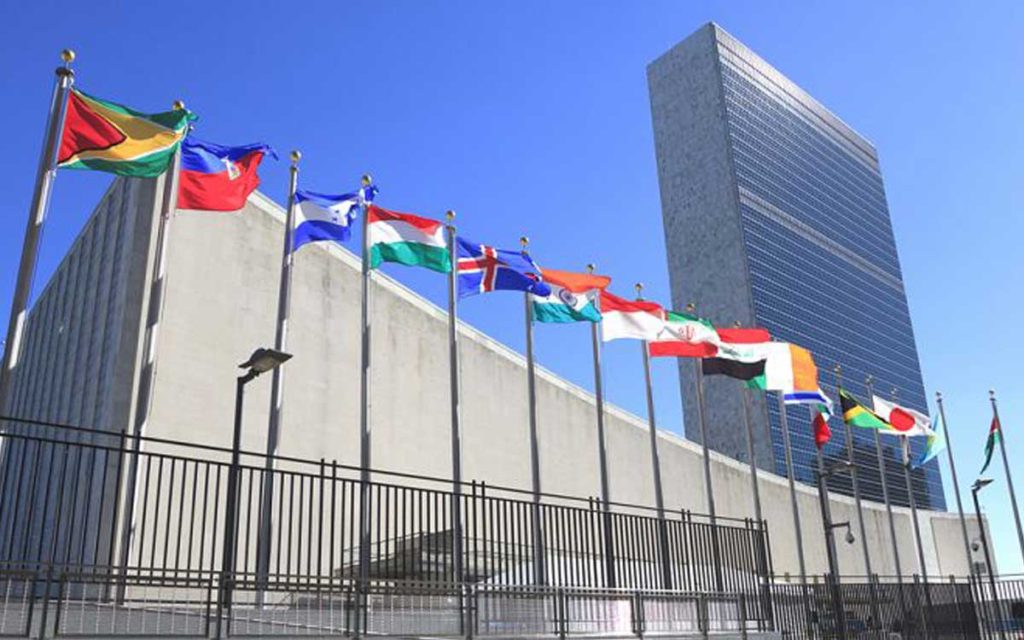 September not only marked the start of a federal election year, it also marked the beginning of Justin Trudeau’s two-year campaign to get Canada a temporary seat on the United Nations’ Security Council for 2021-22. Ten foreign affairs bureaucrats are working full time on

the bid. The campaign also features a maple leaf logo in multiple colours, though the predominant hue is a dark red that looks more like dried blood than the traditional true red of our flag. It’s an unfortunate choice, given the UN’s stated objective of increasing the peace.

Trudeau has been gunning for the security council seat since before the 2015 election, when Canada’s failure to win a seat in 2010 was a handy dart to hurl at then-Prime Minister Stephen Harper. In 2010, Canada was up against Germany and Portugal for two of the council’s 10 temporary seats (the five permanent security council members are the United States, United Kingdom, France, China and Russia). The security council votes on issues such as suspending economic and diplomatic relations between countries, imposing blockades, and authorizing the use of armed force.

Getting onto the UN Security Council is part of Trudeau’s ‘Canada’s back’ pledge to restore Canada’s illusory leadership on the so-called world stage. ‘Canada’s back’ was crafted to appeal to fans of old-school Pearsonite internationalism, and to contrast with Harper’s dreadful foreign policy, characterized by: completion of the Afghanistan mission in 2011, the women’s health initiative, supporting Israel (which may have hurt Canada’s security council bid), negotiating new trade deals with Europe, South Korea and the Pacific region, and telling Vlad Putin to his face to get out of Ukraine. What a litany of failure. The only way Harper could have been a bigger embarrassment on the world stage, was if he had toured foreign countries sporting their traditional and ceremonial costumes.

Trudeau has had three years to learn that it will take more than slogans and a sympathetic media corps to gain enough votes from the UN’s 178 members to win a seat on the security council. Unfortunately, on the files that are thought to count, Canada compares poorly with Norway and Ireland, its competitors for the two 2021-22 seats.

One of those files is foreign aid, where money talks and…you know the rest. Trudeau’s latest promise of an extra $2-billion for foreign aid over the next five years will not even restore Canada’s aid spending to where it was in 2012 under Stephen Harper.

Canadian aid expert Stephen Brown told The Globe and Mail last month that, to other donor countries, “this really stands out as one of Canada’s biggest failings, and one of the areas in which Canada completely ignored the recommendations of the last review in 2012.”

At the core of Pearsonite internationalism is so-called peacekeeping. Luckily for Trudeau, a University of Munich study showed that the more troops a country contributes, the more likely it is to gain security council membership. Unluckily for Trudeau, Canada has been bested by Ireland on this score. According to an August 2018 UN report on peacekeepers, Ireland has contributed the most troops, at 521. Canada has contributed 173 peacekeepers and Norway, 67.

The Trudeau government has taken on a limited role in the UN’s Multidimensional Integrated Stabilization Mission in Mali. But it took two years for Trudeau to find a suitable peacekeeping mission, the Mali commitment is (supposedly) temporary, and it falls short of the 600 troops and 150 police officers that Canada promised in 2016.

But foreign aid and peacekeeping are not the only things that UN members will be evaluating when deciding whether to vote for Canada to take a security council seat. Competing nations will also put forward the themes and issues they wish to pursue on the council.

So what does Trudeau want to pursue on the UN Security Council? Women’s issues and climate change, of course. These are two of the issues that Trudeau wanted to emphasize in the NAFTA renegotiation. And they are also the reasons the US turned its back on Canada to negotiate with the Mexicans first, leading to a high-pressure round of talks that culminated in a last-minute deal.

But the UN member countries are a different audience than Trump and his tariff-happy crew. Maybe they will be impressed by Trudeau’s lofty rhetoric on gender equality and the perils of climate change to low-lying nations.

Ireland launched its campaign in July with the help of U2 front man Bono. Bono touted the UN at a Madison Square Garden concert, the audience studded with over 150 UN diplomats. The next day Bono stood with Irish politicians to announce Ireland’s bid, telling reporters, “We’d like to think Ireland’s experience of colonialism, conflict, famine and mass migration give us a kind of hard-earned expertise in these problems. And, I hope, an empathy and I hope humility.” He also acknowledged Canada and Trudeau, saying, “That Canada is nice is the worst thing I can say about them.”

Trudeau will need more than Bono-approved niceness to get his coveted security council seat. By the time the UN vote is taken, Trudeau would be into his second term as prime minister, with a five-year record on foreign affairs: the good, the bad, and the overdressed. Responsibility for the outcome of that vote will be his alone. Perhaps it was this reality that prompted Trudeau to downplay expectations at his UN press conference last month, where he told reporters that running for the seat was “a means, not an end.” That would be news to the Harper-bashing Justin Trudeau of 2015.