What would Canada’s natives be without Macdonald? Americans 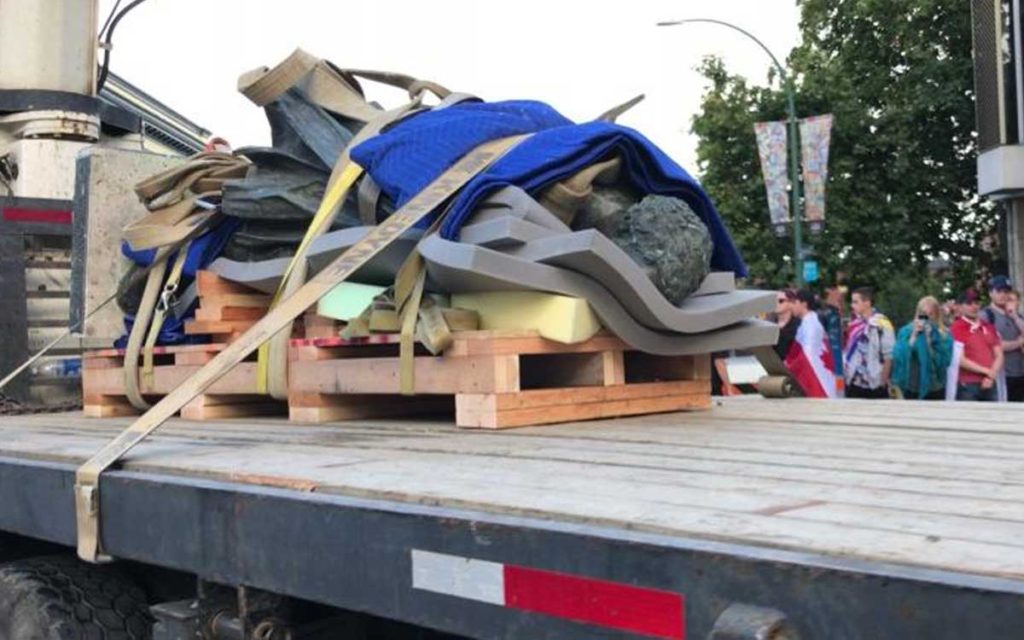 The statue of Sir John A. Macdonald is removed from Victoria’s city hall.

Last week the City of Victoria voted to remove the statue of Sir John A. Macdonald that had stood next to the entrance of its city hall for 36 years. Two days later, Sir John A was horizontal on a flatbed truck, laying on a bed of foam on top of a wooden pallet. At least they put a Tory blue blanket on top of him.

Council had voted 8-1 to take down the statue, on the recommendation of its “city family” panel, comprised of the mayor, three councillors and three indigenous representatives. It was the panel’s first recommended act of reconciliation.

The Times-Colonist reports that a councillor hoping to delay the decision was told that the crane had already been booked. Not surprising, considering the mayor announced on her website the day before council’s decision that the statue would be taken down. As one of the unelected panel members explained: “the decision was made to just do it and we’ll deal with the outcry.”

As many have cried out since, Macdonald’s attitudes and actions towards natives were appalling by today’s standards, rooted as they were in the condescending and poorly-informed outlook of European settlers. But they were typical for the time. More importantly, they are just part of Macdonald’s vast achievements and legacy. Even in the manner that late historian Michael Bliss cheekily summarized them in Right Honourable Men, those achievements are impressive:

Sir John A. Macdonald was Prime Minister of Canada from 1867 to 1874 and from 1878 until his death in office in 1891. During those years, this master manipulator on the Canadian stage, “The Wizard of the North,” heaped fifth, sixth and seventh provinces onto the original four, juggled regional and racial and religious interests, drew the world’s longest railway out of Canadian financiers’ hats, played a tariff card that turned from a joker into the ace of spades, and held the whole rickety contraption together with smoke, mirrors, and hidden wires.

As Donald Creighton explained in Canada’s First Century, “in the first six years of its existence, the new Dominion had nearly attained its appointed natural limits.” To Macdonald, this speedy settling of boundaries was essential, because of pressures at work in Britain, America and Canada’s yet-to-be-secured territories:

It was not that she [Great Britain] hoped or intended to cut the imperial connection with Canada, certainly not until Canada was fully prepared to accept separation; but she was anxious to recall her isolated military garrisons, and to escape from her remaining territorial obligation in North America – her ultimate responsibility for the future of the Hudson’s Bay Company lands.

…both the new American President, Ulysses S. Grant, and his Secretary of State, Hamilton Fish, were expansionists who were prepared to use almost any method, short of armed force, to acquire all or part of British America. In the east, where there were established colonies, the danger was less; but, so long as Nova Scotia was dissatisfied and Newfoundland and Prince Edward Island remained outside the union, there was at least a chance of American intervention. The likelihood was much greater in the west where the politicians and journalists of the frontier state of Minnesota were casting covetous glances upon a vast and almost empty territory which seemed as if it might be theirs for the taking.

Were it not for John A. Macdonald, all the natives west of Ontario could well have been Americans. And their needs and historical grievances would be secondary – at best – to those of African Americans, as they are in the United States today. Does this mean Canada’s indigenous peoples should be grateful to Macdonald? That his support of residential schools should be forgotten? Of course not. But genuine reconciliation is about listening and agreeing on how to move forward. Reconciliation is not “just do it and we’ll deal with the outcry.”

The statue’s sculptor, John Dann, wrote in The Globe and Mail: “I find Victoria mayor Lisa Helps’ actions precipitous and misguided, for they were done in secret, hurriedly (in the span of 10 days), arbitrarily and undemocratically. If the tearing down of my sculpture is the best way to move forward, then I am all for it, but I cannot believe that any rational person who has reflected on our history can really think that removing about 150 kilos of bronze from view is going to change our history, or help us understand it better.”

Amidst all this comes the Trudeau government’s plan to establish a new statutory holiday to recognize natives’ suffering under the residential school system. The holiday was one of the 94 recommendations of the Truth and Reconciliation Commission. If enacted by the federal government, it will give all federal employees the day off, but provinces and territories will have to decide whether to make it a paid day off for all workers.

The holiday can be seen as another subtle downgrading of Macdonald.  Although the federal government established January 11th as Sir John A. Macdonald Day in 2002, many have lobbied for years to have a statutory holiday in Macdonald’s honour.

Pulling down Macdonald is in danger of becoming a trend. In January, a bar that once housed his Kingston law office changed its name from Sir John’s Public House to The Public House, in response to complaints. Last year the Elementary Teachers Federation of Ontario (you know, from the math scores) voted to remove Macdonald’s name from Ontario’s public schools. Last year, the Canadian Historical Association removed Macdonald’s name from its prize for Best Scholarly Book in Canadian History.

Currently Canada has just five federal statutory holidays: New Year’s Day, Good Friday, Canada Day, Labour Day and Christmas Day. Canada Day used to be known as Dominion Day, until a handful of Liberal MPs changed it without notice or debate. It was probably in part to spite Macdonald, the Conservative father of our beautiful Dominion.

Liberal shenanigans aside, it does seem right to have a statutory holiday honouring natives. But how sad that it is to be focussed on residential schools, a relatively small part of the history between natives and Europeans. Once such a holiday is established it will be difficult to erase (unlike Macdonald, apparently). Perhaps in time it can be recast to acknowledge and raise up all the history and achievements of indigenous Canadians.

In the meantime, we should stop pulling down the histories of our founders, mixed as they are. As a Globe and Mail editorial noted: “even if we removed every totem of our national father from Victoria to Bonavista, and scrubbed his name from every school and highway, Canada would still remain as his monument.”