While the West bickers, China steamrolls 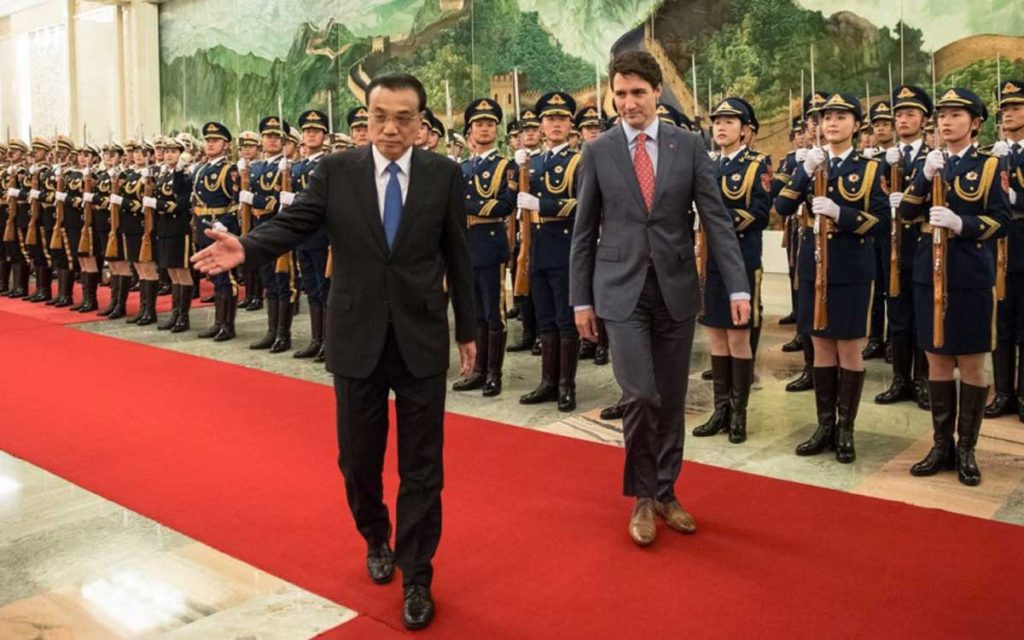 Over the weekend, western leaders (and Vladimir Putin) attended various events to mark the 100th anniversary of the end of World War I. As with most such gatherings these days, it became all about Donald Trump. On Saturday, Trump was criticized for being a no-show to an event at a cemetery where many American war dead are buried. Critics charged that he feared wetting his pompadour in the rain. Then Trump and Melania were late to Sunday’s Armistice Day ceremony. Explanations centering on security were ridiculed. And on it went.

French president Emmanuel Macron used his remarks on Sunday to warn the assembled leaders against nationalism, which he described as the “selfishness of nations only looking after their own interests.” The consensus seems to be that his remark was aimed at Donald Trump, who unabashedly identifies himself as a nationalist. Macron’s remark will have absolutely no effect on Trump, except perhaps to lower Macron further in his eyes.

But Chinese rulers were probably smiling at yet another example of western nations continuing to be distracted by the Trump Show, while China – the most aggressively nationalist entity since the “war to end all wars” ended only empires, not war – continues to go quietly about the business of bending the world to its will.

Recently, the Macdonald-Laurier Institute released a report on China’s nefarious activities, authored by J. Michael Cole, senior fellow with the China Policy Institute and a former Canadian intelligence officer and journalist in Taiwan. The paper is relatively brief and should be read in its entirety. In it, Cole summarizes how China is making up for its failure to project soft power with what he calls sharp power:

Given its inability to project a friendly face, the Chinese Communist Party (CCP) has had to increase its reliance on other, less overt ways of promoting Chinese interests internationally. The term sharp power describes what had hitherto been referred to as political warfare or influence operations. Sharp power encapsulates a strategy by autocratic regimes that “pierces, penetrates, or perforates the political and information environments in the targeted countries.”

The CCP does so through co-optation, bribery, incentivization, disinformation, censorship, and propaganda, among other methods. Examples include Beijing’s influence over multiple Chinese diaspora community associations abroad, its cultivation of current and former politicians in Australia, Canada and elsewhere, and efforts to censor books and publications critical of Chinese regime internationally.

Of course, none of this is news to the Liberal government, which is still determined to sign some kind of trade deal (or sectoral deals) with China. To call any of this ‘free trade’ is an insult to the idea of free trade; but, in fairness, many so-named free trade agreements are not terribly free. At least, however, they are with free nations such as the United States and South Korea, and not China’s undemocratic and increasingly oppressive regime. The Globe and Mail is reporting that finance minister Bill Morneau and trade minister Jim Carr are in China this week for formal financial and economic talks. Prime minister Justin Trudeau is scheduled to meet with Chinese premier Li Keqiang on Wednesday.

Trying to put a good face on relations with China, Morneau boasted that having 145,000 Chinese currently enrolled at Canadian universities is an example of progress. The Macdonald-Laurier paper above cites Chinese students as a tool the regime uses to monitor and pressure academic institutions, professors, the media and other Chinese students. Increased enrollment of Chinese nationals may be progress for university budgets and the Chinese communist party, but it is not clear how it can be counted as progress for academic freedom, Canadian sovereignty, or trade.

Luckily, such a deal may be stymied by the Trudeau government’s own bungling. Trade talks suffered a setback last year when Canadians demanded labour, environment and gender provisions be included in a trade pact. Now there is confusion over whether Canada wants sectoral trade deals or a comprehensive trade deal even bigger than Australia’s. And there is apprehension over inviting negative attention from the Trump regime, which has been open about its intentions to bring China to heel with tariffs before making any trade agreements with them. (The Trudeau government insists that the “non-market nation” clause of the US-Mexico-Canada deal does not prevent them from making a deal with China.)

It has now been over 45 years since Richard Nixon’s famed trip to China. That is two full generations of hoping – nay, expecting – that as China engaged with the world and became more prosperous it would become more free and a good international actor. The opposite has happened, with the communist party using China’s wealth to control its own people and amass a military designed to defend an empire. It built a military base in international waters, and is expanding it unchecked, after an international body ruled it was illegal.

The regime, under president-for-life Xi Jinping, is putting Muslims in re-education camps. It pressured the Catholic church to allow the regime to approve its bishops. It is planning a surveillance apparatus larger than any imagined by Orwell. Its Belt and Road initiative is a trojan horse that will likely make entire nations its debtors. Chinese hackers stole the social security numbers of every federal employee in the US. It steals technology from foreign companies, particularly defense contractors. These are but a few of China’s offenses against the values of sovereignty, property rights, individual rights and the ‘rules-based international order’ that many think is threatened by Donald Trump’s America First-ism.

The Chinese president did not attend the weekend’s events in France, where Emmanuel Macron warned of “old demons coming back to wreak chaos and death.” Perhaps Macron, Justin Trudeau, and Angela Merkel should focus on new ones.