Canadians have been ill-served by Justin Trudeau’s pandemic politics 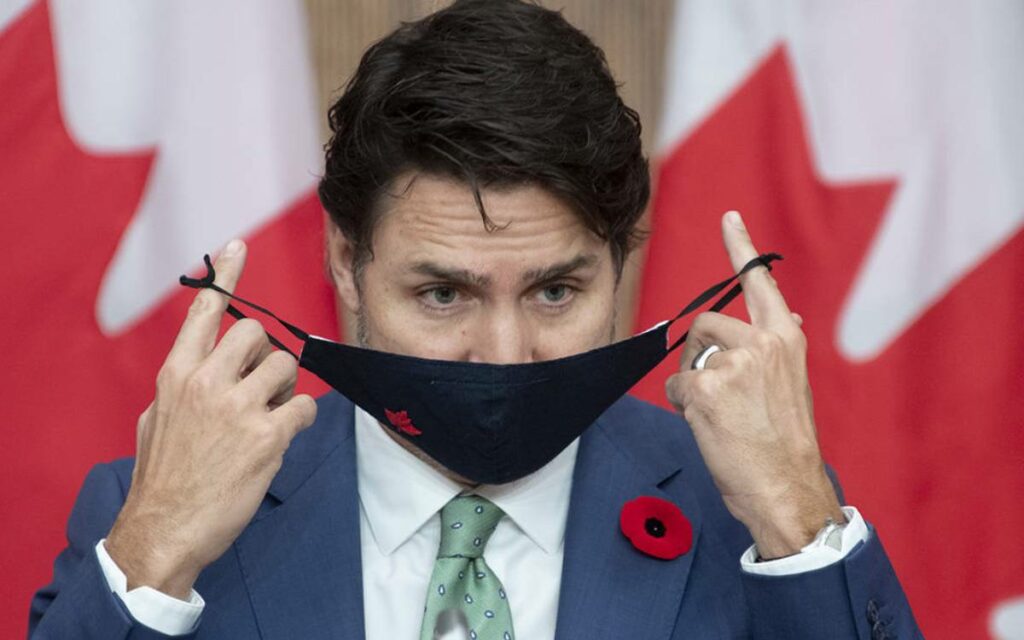 Trudeau puts on a mask after speaking at press conference in Ottawa, November 6, 2020. Photo credit: The Canadian Press/Adrian Wyld

In a gushing self-congratulatory press statement released the last week of July, Prime Minister Justin Trudeau exclaimed that the federal government’s hard work has kept Canadians healthy and safe throughout the pandemic. He lauded the work of Health Canada and reported that the country has now received more than 66 million doses of COVID-19 vaccines – enough to fully vaccinate every eligible person in Canada.

The euphoric announcement came just days before the PM called his longed-for late summer election. Indeed, Trudeau is giddy with the thought that the latest public opinion polls show that 72 per cent of Canadians are satisfied with the federal government’s pandemic efforts, up 15 points from the mid-May assessment when the PM stated we would need to manage through a “one-dose summer.”

Apparently public opinion has changed in the last eight weeks since the country began receiving a steady, reliable supply of vaccines. The Liberals expect to ride this wave of optimism to a majority government. The anticipated campaign narrative will in no way resemble the realities of the last 18 months and what Canadians have endured with the federal government’s gaslighting of facts around the spread of COVID-19 or the procurement of ample vaccines.

It is important to recap the unfolding of pandemic events and place into context the government’s actions. In this way, Canadians can properly hold our political masters to account – and appropriately judge whether they deserve our trust with a new majority mandate.

The first case of COVID in Canada was confirmed in Toronto on January 25, 2020; it was a man in his 50s who travelled from Wuhan, China. It is now known that many flights from China and elsewhere would transport the virus to our country. Yet, for weeks through February and March, Canadians were repeatedly told the situation was not serious and it was not originating from China.

On this point, the Trudeau Government failed to restrict air traffic from China for weeks after the first “official” death was reported in Wuhan on January 11, 2020. Travel from China was restricted by Taiwan on January 26, by the U.S. on January 31, and by Australia a day later. Meanwhile, in that same time frame almost 1,800 people flew from Wuhan into Canada. (Trudeau repeated this negligence again in 2021 when he refused to promptly ban flights from two hotspots, Brazil and India, allowing more deadly COVID variants to enter the country.)

Until mid-March 2020, PM Trudeau, Health Minister Patty Hajdu, and Canada’s Chief Medical Officer Dr. Theresa Tam all deflected any concern about the spread of the virus. Canadians were told masks were not needed. Dr. Tam told us “the flu-like coronavirus” would not impact Canada for at least a year. And, when anyone raised questions and concerns, they were immediately labelled “racists” and “conspiracy theorists.”

So, how is it that Canadians could be so slow to recognize the danger of this health crisis? A Globe and Mail investigative story has revealed the facts of the matter. In 2018, the Trudeau Government had dismantled the Global Public Health Intelligence Network (GPHIN), which was the organization responsible for the country’s epidemiological intelligence to monitor health threats, track deadly viral outbreaks, and provide global advance warnings. It was used during H1N1, Ebola, and SARS. Yet the Trudeau Government quietly stripped the network of its expertise and resources.

We have also now learned of the chaos behind the scenes at Health Canada in early 2020. The country had a severe shortage of face masks after the government dumped two million N95 masks in December 2019 and shipped tonnes of supplies to China in February 2020. Is it reasonable to question whether there is a connection between the government’s early insistence that masks are not required and the lack of adequate supply?

This gross mismanagement by the Trudeau Government was to be replayed with its procurement of COVID-19 vaccines. Canadians now know that in early 2020, the Trudeau government signed a contract and made a secret non-refundable cash payment to a Chinese pharmaceutical company for a vaccine that was never delivered. On May 16, 2020, PM Trudeau heralded an exciting vaccine deal for Canada (although he chose not to mention the deal was with the Chinese). That very week the deal collapsed. The PM worked to actively hide the facts from Canadians for over three months, until they were finally revealed in late August.

From Spring 2020 through to June 2021, Canadians have been paying the price of this botched Chinese deal. In early 2021 when European countries and the U.S. were awash in vaccine doses, Canada had but a trickle of vaccines. In fact, the inadequate and unreliable supply of vaccines dictated Canada’s health policies and its vaccination roll-out program. How else do you account for the facts?

Canada’s lack of vaccines has resulted in the country’s vaccination programs resembling one big sociobiological experiment.

Space will not permit detailing the crass politics that has been played by Trudeau and his ministers through the pandemic.

But, who among us are minding the facts and the details? That’s the key election question.

Justin Trudeau is counting on Canadians being swept up in their relief of being fully vaccinated, hoping that we are thankful for everything his government has done throughout the pandemic. But should we be?