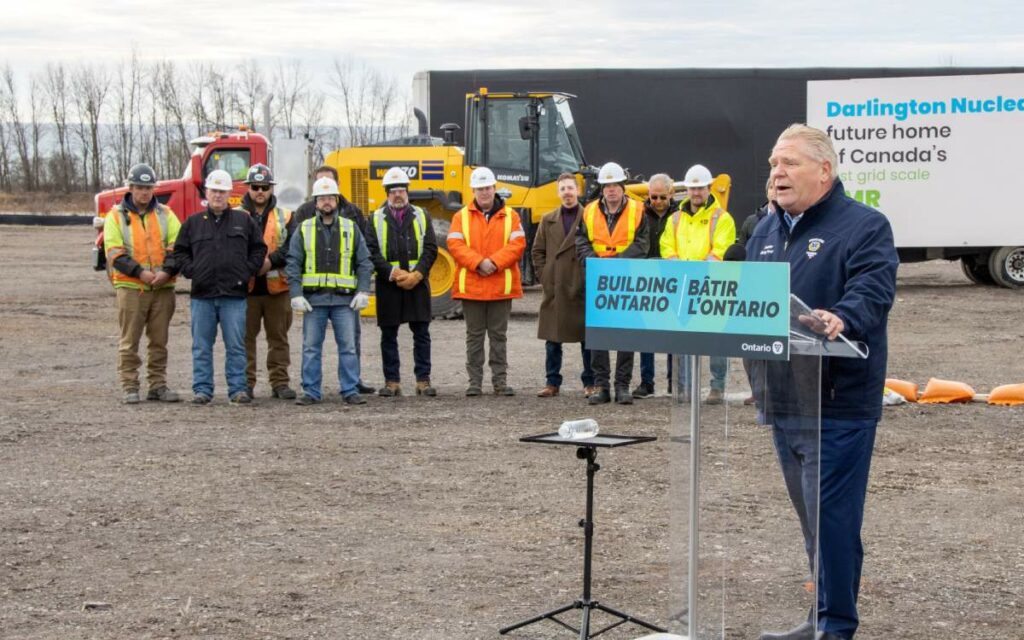 A Niagara-based company is literally laying the groundwork for the future of energy production in Canada.

“(E.S. Fox) will be doing important work in helping us ready for the deployment of our country’s first commercial grid-scale SMR at Darlington,” Minister of Energy Todd Smith told The Niagara Independent in September, following a tour of E.S. Fox’s Niagara Falls facility. “This project will create good jobs and clean energy while cementing Ontario’s reputation as a global hub for nuclear technology and SMR expertise. All of this is helping to create tremendous new opportunities for our province and country.”

Headquartered on Montrose Road just off the QEW in Niagara Falls, E.S. Fox is a world-renowned multi-trade fabricator and constructor. The company was awarded the $32 million site preparation contract in March of this year.

“We are proud to partner together with OPG as early work begins for the planned Darlington Small Modular Reactor,” said E.S. Fox president Spencer Fox. “We are honoured to be a part of this project and look forward to… laying the foundation for OPG to safely set new standards in the global nuclear power generation industry for the benefit of all Ontarians.”

Early work will continue into 2025 and support more than 100 new jobs in Durham Region.

Premier Doug Ford was on hand at the Darlington site alongside E.S. Fox employees and Minister Smith to announce commencement of the historic project on December 2.

“With global businesses looking to expand in jurisdictions with clean and cost-effective electricity, small modular reactors will help compete for and attract more game-changing investments in Ontario’s economy,” said Premier Ford. “Our government is getting it done and building the future of nuclear energy right here in Ontario to support the needs of our growing province.”

In December 2021, it was revealed that OPG struck a deal with GE Hitachi Nuclear Energy to deploy an SMR at the Darlington Nuclear Generating Station in Durham Region, the only site in Canada currently licensed for a new nuclear build.

“This project leverages OPG’s decades of experience in providing reliable, safe, and affordable electricity as well as Ontario’s strong nuclear supply chain to develop the next generation of nuclear power,” said OPG president and CEO Ken Hartwick, who was also on hand the Friday before last to announce the start of early work. “The electricity produced by the SMR at Darlington will help ensure we meet Ontario’s growing energy needs, as electrification drives demand.”

Referred to as the “next generation of nuclear”, SMRs use fission reaction to provide reliable, carbon-free electricity, but with a much smaller land footprint than traditional reactors.

A single SMR of about 300 megawatts in size can power 300,000 homes and prevent between 0.3 megatonnes (MT) to 2 MT of carbon dioxide emissions per year, depending on where it is located and what kind of power it is displacing.

The new Darlington reactor will be the country’s first-ever commercial, grid-scale SMR and first new nuclear reactor in Ontario since 1993.

Ontario currently has 15 nuclear reactors in operation – and three reactors under refurbishment – at three sites, providing over 50 per cent of the province’s clean electricity.

Construction completion of the Darlington SMR is currently set for 2028, with commercial operation starting in 2029.