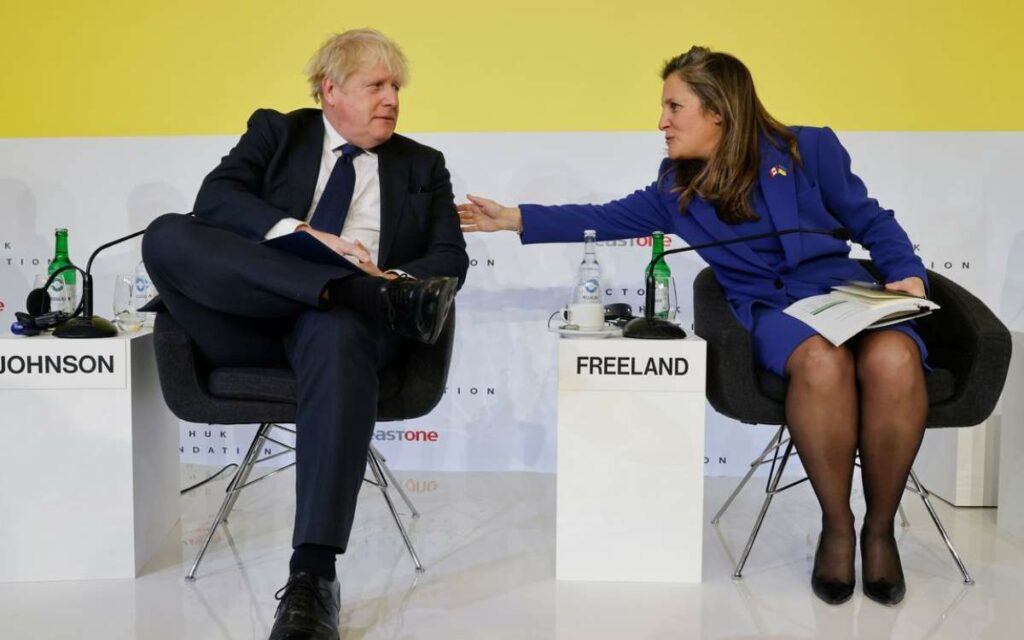 The World Economic Forum (WEF) held its 2023 general meeting this past week. Several of Canada’s most influential public officials and corporate actors were in Davos, Switzerland for the festivities. Among those in attendance was, of course, WEF trustee and Deputy Prime Minister of Canada Chrystia Freeland. Photo credit: Bloomberg

This week thousands of elected representatives, public officials, corporate CEOs, heads of banks and financial institutions, along with the leading technocrats from international bodies such as the United Nations (U.N.), the International Monetary Fund (IMF), and the World Trade Organization, all gathered in Davos, Switzerland for the World Economic Forum (WEF) Annual Meeting. There were numerous Canadians among the attendees who jetted into Davos to participate in discussions on the global climate crisis, global security with a focus on the war in Ukraine, and international financial planning.

This scribe has written on a number of occasions on the WEF and Canada’s involvement with its global agenda as prescribed by Klaus Schwab. So that we do not regurgitate news and issues, here are past columns by way of reference:

The news and commentary generated by the Davos gathering through the week serves as a springboard into repeating questions about the Canadian government’s commitment to the WEF’s global agenda. What has the Trudeau government promised the WEF with respect to carbon taxes and policies, intervening in financial markets, greening of the agricultural sector, economic and climate migration, and introducing central bank digital currency, just to name a few of the policy items discussed at the WEF meetings?

These queries are pertinent to the question of whether the Canadian government is implementing policies with the best interests of Canadians in mind, or rather with a set of policy objectives that has been drawn up and agreed to elsewhere.

These queries also beg a question about the multiple responsibilities of Chrystia Freeland, Canada’s Deputy Prime Minister and Finance Minister, as well as a Trustee on the WEF Board of Directors. Presuming that the interests of Canadians and the WEF global policy agenda do not perfectly align, whose interest is Ms. Freeland acting on in any one instance?

When asked to comment about her potential conflict of interests in Davos on Wednesday, Freeland hurriedly brushed by reporters in silence.

Highlights from the 2023 WEF Annual Meeting

For its deliberations this year, the WEF declared 2023 as the “Year of the PolyCrisis.” It presented a conference program with a smorgasbord of serious issues that are jeopardizing peace and security, world finances and, with regards to the mounting climate crisis, existence itself. From the perspectives of the WEF leadership, countries’ commitment to the Forum’s “progressive climate and social-justice agenda” will enable the international community to steer successfully through the current crises. Adhering to the WEF objectives will also ensure we all transition into what WEF founder Klaus Schwab describes as The Fourth Industrial Revolution; it is the dawning of a new era that will fuse “our physical, our digital, and our biological identities.”

Through the week, this overarching aspiration of Klaus Schwab resulted in policy discussions about how governments’ may manage more “climate positive lifestyles,” advance diversity, equity and inclusion objectives, rebuild trust in institutions, contribute to the restoration of peace in Europe, and intervene in financial markets to drive environmental, social and corporate governance objectives.

Chrystia Freeland appeared on the third day of the conference to participate in a plenary session entitled “Restoring Security and Peace,” which focused on the war in Ukraine and restoring stability to Europe and the world.  In the session, Freeland championed Ukraine’s request for more military support from its allies and she supported NATO Secretary General Jens Stoltenberg’s claim that “Weapons are the way to peace.” Freeland went further to state that helping Ukraine win “would be a huge boost to the global economy.”

Freeland followed up this appearance with another performance on Thursday alongside former UK PM Boris Johnson. The two tag-teamed a persuasive appeal for allies to immediately provide Ukraine with all the weapons it needs. Johnson told doubters to stop worrying; Russian President Vladimir Putin “will not” use atomic weapons. Freeland employed a hockey analogy citing Wayne Gretzky’s bons mots “I skate to where the puck is going, not where it has been”, and then she claimed “this puck is going to Ukrainian victory.” In what was an obvious set-up, Johnson amused all present by shooting back “tell Putin to get the puck out of Ukraine.” Great sport.

Follow-through on the Davos discussions

In a special to The Globe and Mail, Canadian business strategist Don Tapscott stated that in the last 20 years he has witnessed the WEF “evolve from a think tank into what you could call a “do tank,” and now a global network that engenders dozens of communities that engage tens of thousands of people to research, discuss and address many global problems year-round.”

One of the opening speakers in Davos was actor Idris Elba who described the dynamics of WEF in this way: “Today it is well recognized that the economic, social, and natural well-being of our planet are completely interrelated, and Davos may be one of the first platforms to get it. We understand the power and the change that can come from this room. Davos has become the de facto platform for governments, for corporates, for philanthropists, for activism, for protesters to mobilize quickly.”

So, given the expectations of this elevated forum, the challenge for government leaders, corporate multinationals, and international bureaucracies is to follow-through on the Davos discussions. They leave the WEF annual meeting energized to find ways to implement policies designed to advance the WEF global agenda.

In some cases, this global agenda is imposed to the detriment of a nation’s citizenry: government impositions that have upended farmers in Sri Lanka and now Holland, the strict lockdown regime negatively impacting New Zealand, the migration policies causing unrest in Germany and Sweden, and the overt political actions to shut down oil and gas operations in resource-rich countries – resulting in an energy crisis (and some countries needing to re-fire their coal plants!).

In Canada, citizens are now coming to realize the implications of a government committed to the WEF and what it will mean for farmers, oil and gas workers, and all who must cope with the rising cost of living brought about by a punitive carbon tax regime. Canadians are also becoming aware of the untold motives behind the Trudeau government enacting emergency orders so as to freeze bank accounts. Assuredly, the lessons learned from this dark chapter of Canada’s history were not lost on the IMF, U.N. and WEF technocrats and their enablers at the Canadian Bankers Association, contracted by the WEF to develop a global digital ID program.

It is not conspiratorial to assert that governments around the world, Canada included, are implementing policies discussed in Davos at the WEF meetings. Is it not reasonable to request transparency regarding the commitments made at this international forum? And, if so, why is it that repeated questions about the WEF go unanswered?