Three federal news stories from the year that was, and three predictions for the year yet to be 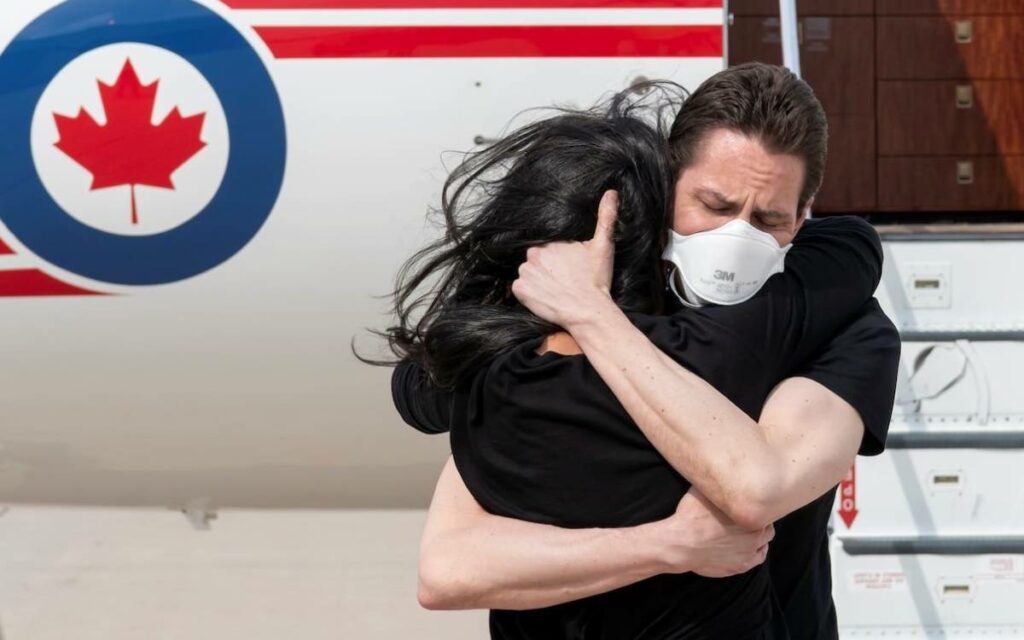 Michael Kovrig embraces his wife Vina Nadjibulla after arriving at Pearson International Airport in September. The release of Kovrig and Michael Spavor following 1,000 days of imprisonment in China was easily one of the most consequential federal news stories of 2021. Photo credit: Cpl. Justin Dreimanis/DND-MDN Canada

With the country’s mounting health and economic challenges brought about by the seemingly never-ending COVID-19 pandemic, Canadians are likely to remember 2021 as another annus horribilis. Today, as we brace for the full impact of the Omicron wave and debate booster rollouts and vaccine passports, there are few who view the dawning of the new year with any cheerfulness. Small wonder. Consider three news stories of 2021 and three stories to unfold in 2022.

Since day one there has been a bungling, political agenda that has driven the Canadian government’s response to COVID-19. Recall in 2020, PM Justin Trudeau and then Health Minister Patty Hajdu were slow to recognize the severity of the health crisis even after the World Health Organization had declared COVID-19 “a pandemic.” The risk to Canadians “was low” and there was no need for masks. PM Trudeau refused to ban international flights from China and other “hot zones.” The ineptitude continued into 2021 with the mismanagement of vaccine procurement and supply.

Canadians will never know the true story of the politics behind the scene as the Trudeau government has gone to great lengths to bury the facts. As time marches on, Canadians’ will be less interested to know about Health Canada’s lack of acumen in assessing the unfolding health crisis; the secret Canada-China virus research at the Winnipeg lab; the PMO’s coverup about PPE shortages; the failed Canada-China vaccine; the exorbitant costs of purchasing vaccines months late and the unreliable supply of vaccines; and the many pandemic-related, sole-sourced contracts awarded to Liberals.

The “Two Michaels” and China

The silver lining in an otherwise dark cloud of 2021 was the news of the release of the “Two Michaels” from their Chinese prison cells. With the return of Huawei executive Meng Wanzhou, the Communist China government sent home Canadians Michael Kovrig and Michael Spavor.

The Two Michaels’ imprisonment for more than 1,000 days has brought into clear focus the conflicts of interests between the governing Liberals’ foreign policy respecting China. The multifaceted links between the Laurentian Liberals and Communist China have been exposed: Power Corporation’s China business empire and its incestuous ties to Montreal Liberals; the business relationships and interests that Ambassador Dominic Barton (and his wife) have with China and the Asian markets; and the documented Trudeau family’s infatuation with Communist China. From permitting Huawei’s G5 technology in Canada to the human rights abuses of the Uyghurs concentration camps, the headlines in 2021 regarding Canada-China relations revealed an embarrassing, unprincipled foreign policy. The Trudeau government’s ties with China are increasingly jeopardizing Canada’s traditional alliances.

Justin Trudeau called the 44th federal election with the goal of winning a majority and securing unchecked parliamentary control to respond to the pandemic and reset the Canadian economy. However, after a lackluster campaign, his Liberals were returned to Ottawa with another minority government and the least amount of electoral support ever in the history of Canada. Less than one in three people who cast a ballot chose to vote Liberal. And those Liberal supporters were found primarily in urban centres. In fact, the 2021 contest exposed the widening chasm between easterners and westerners, and urban- and rural-Canadians.

Trudeau’s gambit to grasp greater control may have failed, however the PM and his advisors have pivoted to advance their agenda outside of parliament. There have been unprecedented delays in this post-election period with the PM’s selection of a new cabinet and his ministers’ mandate letters, as well as the return of parliament and the resumption of MPs’ work. It is a telling commentary of how the PM is choosing to operate when there has been less than 20 days of parliamentary debate scheduled in the last six months.

Deteriorating State of the Canadian Economy

All signs suggest Canadians are in for a rough ride with both their personal finances and with the country’s economy. Inflation is now at the highest level it has been in decades. Statistics Canada notes it is running higher than wage increases, “which means the purchasing power of Canadians has diminished.” The average family of four in Canada will spend $966 more on the same food in 2022 as they did this year. Not to belabour the point, but 2022 will be challenging: it will cost more for food, more for energy (tax hikes and rising costs), and inflation will erode the value of our dollar.

The federal government is $1.2 trillion in debt and it is growing at an incredible rate of $17.6 million per hour. The government’s inability to control its spending is just “pouring fuel on the fire” of inflation, says Philip Cross, former chief economic analyst for Statistics Canada. The spiral downward for Canada’s economy has prompted the Organization for Economic Cooperation and Development to project Canada as the worst performing economy of its 38 members through the next three decades to 2060.

Liberals Plan to Build Back Better

Led by PM Trudeau and Finance Minister Chrystia Freeland, the federal government is implementing the World Economic Forum’s global agenda to “build back better” by redesigning capitalism and redistributing wealth in Canada. With crisis management lessons learned from its pandemic response, the Trudeau government plans to transition to managing the fight against climate change. The “global climate emergency” will provide the rationale for Trudeau and Freeland to introduce new personal and business taxes, increase government intervention in the private sector, and establish global mandates for Canadians to follow.

Building back better in Canada translates to shutting down the oil and gas industry, subsidizing green programs and renewable energy, and increasing taxation to pay for it all. In 2022, Canadians are sure to awaken to the grand design that the Trudeau government has for resetting Canada’s economy. (Our reality is reflected in the WEF ad that states, “You’ll own nothing. And you will be happy.”)

In 2022, this inequity must be addressed. There are substantial investments to be made in hospital infrastructure, long-term care services, and hiring of new health care personnel. Remarkably, with the country seized by the largest health crisis Canada has ever experienced, the 2021 federal budget committed no new health care dollars to the provinces. In the fall economic statement there was some dollars identified but not near the amount required. As president of the Canadian Medical Association Dr. Ann Collins has stated: “Building resiliency for the future must include real commitments to health care. If anything, this pandemic has shown us where the problems are, but we must address them before it’s too late.”

In its lead editorial assessing the New Year, the international news organization The Economist offered: “As 2022 draws near, it is time to face the world’s predictable unpredictability. The pattern for the rest of the 2020s is not the familiar routine of the pre-covid years, but the turmoil and bewilderment of the pandemic era. The new normal is already here.”

This editorial comment is not reassuring, but it is realistic. If the new normal is here then, for Canadians, this means in 2022 we will get just more of the same from the Trudeau government. Tax hikes. Inflation. Dogmatic green policies. Divisive national politics. Embarrassments on the world stage.

This is all predictable.