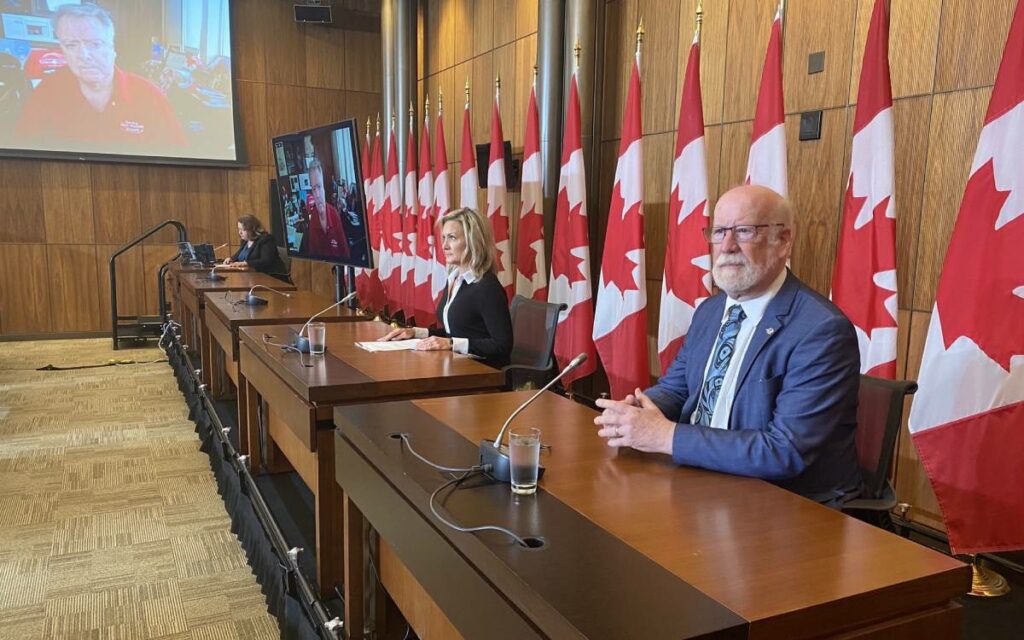 Another tourism season is under threat as Americans hoping to avoid “uncertainty and hassle” of mandatory border measure look elsewhere to spend travel dollars. Public officials and businesses from border communities across Canada held a press conference Wednesday, June 15 (pictured) to plead with the governing Liberals to heed their concerns and scrap the ArriveCAN app once and for all. Photo credit: Twitter/Frontier Duty Free Association

As pressure on the federal government continues to mount from all sides, this past week saw a new round of bi-national, tri-partisan pleas for the governing Liberals to eliminate the mandatory use of ArriveCAN at Canada’s international ports of entry.

On Wednesday, a group of border city public officials, including Mayor of Niagara Falls Jim Diodati, held a joint press conference to plead with Justin Trudeau’s government for relief from the devasting impact the controversial app is having on local tourism, claiming it’s discouraging Americans from visiting.

“What is happening right now is that Americans are showing up in their minivan with their family at the border with no knowledge of the ArriveCAN app,” said Diodati. “They don’t have roaming, they can’t download the app, there’s a line-up of cars behind them, they can’t get into the country.”

While foreign nationals must be fully vaccinated against COVID-19 to enter the U.S., the American government doesn’t have any kind of centralized reporting system required for travel akin to ArriveCAN.

According to Brian Higgins, Democrat congressman for the cities of Buffalo and Niagara Falls, the app is creating such confusion and frustration that U.S. residents are simply cancelling their cross-border trips to Canada.

“My office regularly receives calls from Western New Yorkers frustrated and confused by the technology and frequently changing, disjointed requirements for crossing between the U.S. and Canada,” Higgins said in a media release following Wednesday’s press conference.  “Consequently, to bypass the uncertainty and hassle it creates, many are avoiding making the trip across the border entirely.”

In Niagara Falls, though travellers from the U.S. typically make up only 25 per cent of visitors, they account for 50 per cent of annual revenues for the local tourism and hospitality industry.

With Americans continuing to jettison trips to Canada, economies all along the U.S.-Canada border face another potentially disastrous year.

Yet, as long-time mayor of Sarnia Mike Bradley explained, the federal Liberals don’t seem to care.

“Through the 22 months of the border issues, we stood with the federal government. We met regularly by Zoom with them. And now we’re just on the back burner,” said Bradley. “It’s like a boa constrictor on our communities…and now we can’t even get them to respond to the needs that we have.”

“I’ve been in politics a long time, and when you’re riding a dead horse, dismount. That’s what the federal government needs to do.”

In a separate engagement Wednesday, the federal government’s Standing Committee on International Trade heard witness testimony from industry stakeholders and representatives from the Canada Border Services Agency (CBSA) and Public Health Agency of Canada (PHAC) as part of a new study on ArriveCAN.

The study, prompted by a motion put forward by Conservative MP for Niagara Falls Tony Baldinelli, is investigating the potential impacts the app is having on certain sectors, including tourism.

“In testimony (Wednesday), the committee was informed that American visitation is not expected to fully recover to pre-pandemic levels until 2026,” Baldinelli said after the meeting.

“The Tourism Industry Association of Canada, the Canadian Chamber of Commerce, and the Customs and Immigration Union all confirmed to the committee that the ArriveCAN application is causing major delays at international ports of entry and stalling economic recovery from the COVID-19 pandemic, which is disproportionately impacting Canadian travel and tourism.”

“It is incumbent on them (the Liberals) as the federal government, to fix the problem they created, to save the 2022 summer tourism season in Canada.”

For its part, the Liberal government continues to maintain that enhanced border measures are only temporary, and that the government’s approach to the pandemic remains “flexible and adaptable”.

However, as The Niagara Independent exclusively reported last month, the CBSA, via the Ministry of Public Safety, appears intent on making the mandatory use of ArriveCAN a permanent fixture of travel to Canada.

Per the CBSA’s internal 2022-23 departmental plan, the agency intends to keep “leveraging ArriveCAN” as part of its “vision for the border of the future”.