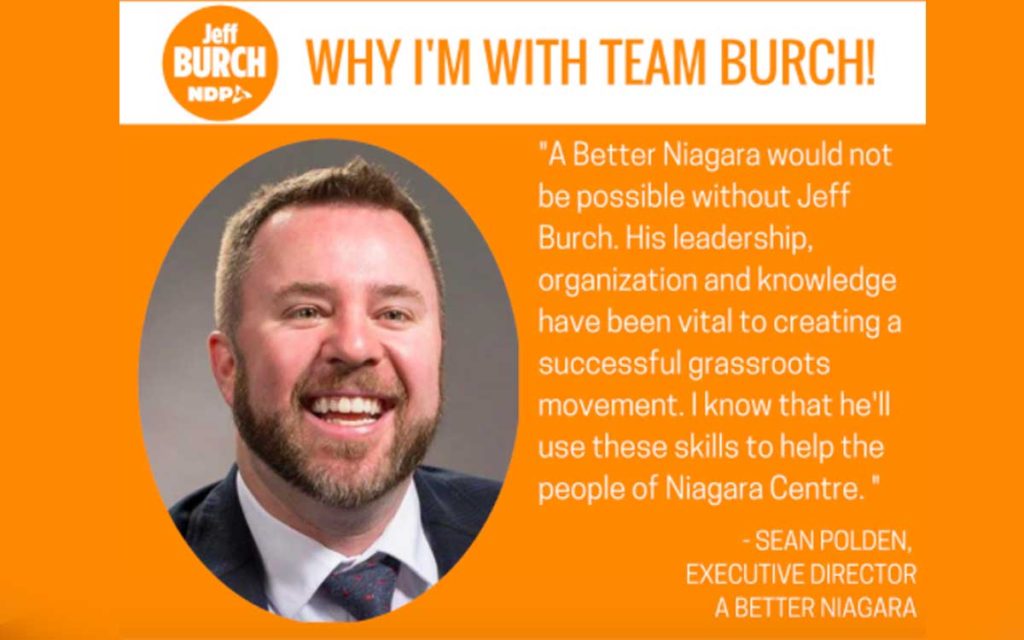 Niagara’s municipal election is now just 10 days away and there’s no doubt the online rhetoric will reach a feverish pitch in what’s left of the campaign. One group in particular, A Better Niagara, has been aggressively pushing a message of change through their website and social media channels.  The group has been politically active for months, holding seminars on how to run a proper campaign, recruiting candidates that will agree with what A Better Niagara espouses, and attacking certain current councillors (conservative) while promoting others (usually NDP affiliated) that suit their ideology.

Recently, a website, abetterniagara.ca has surfaced which exposes the left-wing connections behind A Better Niagara. Using photos, documents and social media posts – the site picks apart A Better Niagara’s claim to be non-partisan, exposing the group as a left-wing NDP front who are simply trying to get as many of their endorsed candidates elected as possible. In exchange for their endorsement, A Better Niagara goes so far as to make candidates sign a pledge to the group to uphold their values and agree to justify their actions if required.

According to abetterniagara.ca: “By handpicking candidates who fit a particular ideological narrative and disparaging their opponents under the guise of restoring ‘accountability, transparency, and integrity’ – A Better Niagara is trying to shift the peninsula’s political establishment firmly to the Left.”

An example of “fitting a particular ideology” can be found in a chart that A Better Niagara has circulated that lists which current regional councillors they support, which ones they don’t and which ones they are neutral on. The candidates were judged based on whether or not they voted the “right way” or the “wrong way” on issues. Many residents The Niagara Independent spoke with found it offensive and an affront to democracy that one group has decided what is the “right way” and “wrong way” to vote.

Catherine Swift, who wrote about third party organizations like A Better Niagara in a previous column titled, Voters Beware, recently said: “What I find offensive about these types of groups is that they misrepresent themselves and are not up front about who is financing them. They claim to be non-partisan and want more transparency etc. but what they really want is bigger government which means higher taxes for all of us.”

Liberals and Conservatives also try to get “their people” elected to municipal positions. However, never in Niagara’s history of municipal elections has a group been so publicly aggressive as A Better Niagara. Many have pointed out the hypocrisy of the group though. Members of A Better Niagara, particularly the leaders, have consistently attacked the so-called “conservative cabal” at Regional Council and have said council should be non-partisan. But now, very publicly, A Better Niagara is making a strong effort to get left-leaning candidates elected so they will have “control” of council.

In theory, municipal candidates should be running on their own ideas and plans for the towns, cities and regions in which they live. Councils will have to work with the governments of the day to access funds for infrastructure projects, have their say on proposed legislation and lobby to improve public services like more hospital beds. Niagara is already in a tough spot with three NDP MPPs while a strong majority Progressive Conservative government is calling the shots at Queen’s Park.

Local business owner and Niagara advocate, Alex Digenis says you have to be able to work with anyone in order to advance Niagara. “I think our municipal politicians need to be Switzerland. They will have to work with Provincial and Federal governments of various political parties and you can’t bash those politicians over time and then go to them hat in hand looking for money to support Niagara.”

In a previous article for The Niagara Independent veteran political strategist, Mark Towey said, after Niagara was painted almost all orange after the provincial election: “This year’s municipal elections offer a second chance to elect representatives who can build good relationships with the new government. With a bevy of NDP shut-outs in the provincial legislature, smart voters in St. Catharines, Niagara Falls, and the region may want to elect a crop of mayors and councillors who can work directly with Doug Ford and his caucus.”

Many of the candidates that A Better Niagara has endorsed have very publicly bad-mouthed Premier Ford and the PC party on social media. Most of these negative comments were made during the recent Provincial election while A Better Niagara members worked for NDP candidates.

The big question will be whether or not such an aggressive, negative, attack-dog style approach as displayed by A Better Niagara will have an impact. “The re-election rate at the municipal level in Ontario is somewhere around 94% — which means it’s rare to unseat an incumbent,” explains Dan Muys a veteran campaign manager and campaign strategist. “There’s always a lot of noise in the final weeks and days of the campaign and it’s difficult to cut through the clutter.”

Is electing a large number of left-wing municipal politicians who all act, think and vote the same way something Niagara residents want? We’ll find out on Oct. 22.