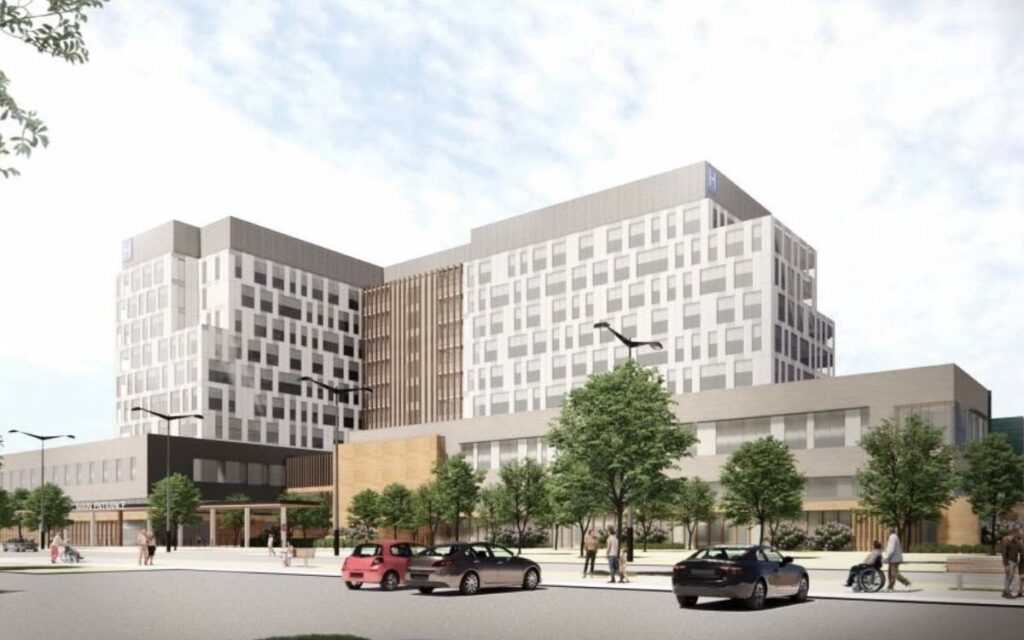 Once contract details are finalized over the coming weeks, construction on the over-$1 billion project will begin. Photo credit: Niagara Health

The South Niagara Hospital project officially has a builder.

On Monday, Infrastructure Ontario and Niagara Health named EllisDon Infrastructure Healthcare (EDIH) as the preferred proponent to design, build, finance, and maintain the brand-new hospital to be located in south Niagara Falls at the corners of Montrose and Biggar roads.

EDIH was one of three previously short-listed teams invited to bid on the project back in October 2021, and one of two potential proponents to successfully respond by RFP close earlier this fall.

The EDIH team breaks down as follows:

Infrastructure Ontario and Niagara Health will now work to finalize contract details with EDIH. The project is expected to reach financial close in early 2023, which will mean that relevant contracts have been signed and a financing rate has been set.

It’s anticipated the entire project will cost in excess of $1 billion, with funding sourced from the province, local municipalities, Niagara Region, and several private donors.

The Niagara Region has already committed $44.5 million to the project. The City of Niagara Falls and Town of Fort Erie are both expected to finalize their commitments in the near future.

Since 2018, Ontario has invested some $20 million towards planning the South Niagara Hospital. The much-anticipated new facility will consolidate and expand acute care services in the area, replacing outdated infrastructure with high tech facilities and supporting better and more connected care in the region.

In addition to emergency, critical care and surgical services, the South Niagara Hospital will feature several centres of excellence specializing in stroke, complex care, geriatrics and geriatric psychiatry, and wellness in aging.

To meet growing demand for care in Niagara, the new hospital is planned to have 469 beds – 156 more than the combined total number of beds at Niagara Health’s Port Colborne, Fort Erie, and Niagara Falls facilities.

Once the new hospital is complete, Niagara Health will continue to operate the existing facility in St. Catharines, along with the Welland campus.

The approximately 1.2 million square foot, 11-storey facility is slated for completion in late 2026 or early 2027.